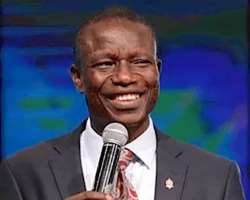 The National President of Pentecostal Fellowship of Nigeria (PFN), Bishop Francis Wale Oke has declared that PFN will not support any political party that field Muslim-Muslim tickets in the 2023 polls.

Bishop Oke spoke on Saturday, May 14th, 2022 in Osogbo during the celebration of 30th anniversary of PFN in Osun State.

Oke in a statement issued by the state Director of Media, Bishop Seun Adeoye explained that Nigeria is a secular state and that Christians will not fold their arms and allow a situation where the president and the vice-president would be Muslims.

According to him, it would also be wrong for a Muslim to take over from President Muhammadu Buhari after eight years as president.

"The Church in Nigeria is saying No to a Muslim-Muslim ticket. We are going to mobilise the church against such political party. PFN has 65 million people and we will vote against such party".

He said, "Obasanjo handed over to Yar'adua, Yar'adua to Jonathan and Jonathan to Buhari and who else should Buhari hands over to but a Christian".

He called on all PFM members to ensure they possess their Permanent Voter's Cards (PVC) and vote and any bad government.

On the killing of Deborah Samuel in Sokoto, the PFN President condemned "those who were killing in the name of religion".

"It is regrettable that one of our daughters was stoned to death and set ablaze. We urge all religion leaders in Nigeria to educate their adherents. Nigeria is not again in stone age. It is criminal offence and the killers should be fished out and brought to book. They are killers and the punishment meant for killers be meted on them" - said.

In his speech, the Governor of Osun State, Alhaji Adegboyega Oyetola represented by his deputy, Mr. Gboyega Alabi explained the roles being played by his government to ensure peace in the state.

The National Vice-President (South-West), Archbishop John Alagbala Osa-Oni and the state Chairman of PFN, Prophet Isaiah Adelowokan noted that the PFN in the zone and the state are fully committed to the PFN 10 point agenda.