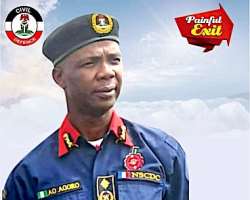 This is contained in a release issued by the Public Relations Officer of the NSCDC, Osun State Command, Assistant Superintendent of Corps II (ASC II) Atanda Olabisi, on behalf of Commandant Emmanuel Ocheja at the Command headquarters, Ilesha Road, Osogbo, on the 12th May, 2022.

The release prays that God will give the Lagos State Command and the family he left behind, the fortitude to bear the irreparable loss and, as his remains are laid to rest today, may he find peace in death.