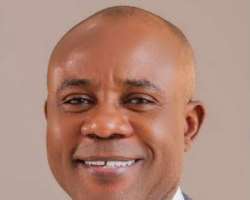 The Enugu Patriotic Front (EPF), a nongovernmental organization based in Enugu State, has accused one of the Peoples Democratic Party (PDP) gubernatorial aspirants in the 2023 general elections of “thinking that he can purchase the governorship with a two billion naira (N2BN) naira bribe”.

According to the group in a statement, the Enugu State government and people “are too sophisticated to fall prey to a bribe of N2BN which Mr Peter Mbah, owner of Pinnacle Oil, has been boasting he gave to our highly revered governor, Right Honorable Ifeanyi Ugwuanyi, to give the PDP national leadership a month ago”.

The reported gift, the NGO explained, “is supposedly to help prepare the ground for the governor to retain his leadership of the party.

" This will be done by the PDP national leadership accepting his own set of delegates at the ongoing PDP congresses”.

The statement, signed by Chief Bernard Ogbodo, president of the Enugu Patriotic Front, and Dr George Asogwa, the secretary, wondered why Mr Mbah, a former Chief of Staff and later Commissioner for Finance in the state, should play “kiss and tell like an overexcited teenager if actually he gave the said N2BN to His Excellency”.

There are thousands of party stakeholders across the country who support their state governments with bigger amounts without the public knowing, stated the group which accused Mbah of childish flippancy.

Such a person, the statement continued, “cannot be trusted with state security and state secrets generally.

“Clearly, such a person has no leadership attributes”.

The group asked the PDP gubernatorial aspirant to tell the public why the Economic and Financial Crimes Commission (EFCC) detained him for more than seven months and also provide a detailed account of explanation of how he came about the money with which he set up Pinnacle Oil company in Lagos.

“This demand is necessary”, argued NGO, “because Mbah’s principal, Senator Chimaroke Nnamani, was arrested and tried by the EFCC for unconscionable heist against Enugu people when he was the governor from 1999 to 2007.

“He thus forfeited housing estates, the Cosmos radio station and Rainbow Communications, among others, to the Federal Government.

“What was Mr Mbah’s role as the Chief of Staff and later Commissioner for Finance in the sordid drama of his principal against our people?”

The Enugu Patriotic Front accused Mbah of not disclosing in his expression of interest and nomination form to the PDP headquarters that he has an impending case of almost one billion naira petroleum supply fraud with the EFCC, for which he is being prosecuted at a Lagos High Court.

“He ought to have been disqualified by the PDP Governorship Screening Panel for the South East led by Professor Yusuf Dankofa, a Kaduna-based lawyer.

“After all, another PDP panel disqualified a former member of the House of Representatives, Honorable Chuma Nzeribe, who did not disclose to the screening panel that there is a bench warrant for his arrest in his battle with the EFCC over fraudulent transactions, was disqualified”.