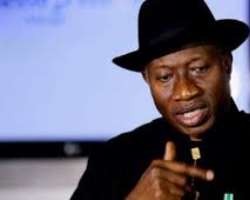 Sani Al’ameen, a chieftain of the All Progressives Congress (APC) and Bauchi gubernatorial aspirant has disagreed with a statement credited to Human Rights lawyer, Femi Falana (SAN) in which he said former President Goodluck Jonathan is ineligible to run for the office of the President because he has been sworn into office twice.

The senior lawyer who based his assertion on section 137 (3) of the Constitution of the Federal Republic of Nigeria, 1999 (as amended), argued that former Goodluck Jonathan did not merit any longer to contest for Nigerian presidency.

However, in a statement shared with newsmen on Friday, Al’ameen discountenanced with Falana, saying that the law does not apply to Jonathan because it was enacted after he had been sworn in twice.

According to him, the first tenure of late President Umaru Yar’adua which he completed will not be counted as part of his tenure because it was originally Yar ‘adua’s mandate.

“It is wrong to say that Jonathan is disqualified from contesting the 2023 presidential election just for the simple reason that if he wins the election he will spend an additional term of four years. Let me take you a bit back. Former Governor of Yobe State, Ibrahim Geidam completed the first tenure of the late Mamman Ali and he contested the election twice and won without hindrance of any kind from anybody.

“Jonathan who comes from the south introduced and spent billions of naira as education intervention and build hundreds of tsangaya Schools for the benefit of all Almajiri children who were neglected by the previous leaders, both military and civilians.

“He did all this work in the interest of one nation, for that we are still calling him to come out and contest for president in 2023. We want Nigerians to support him to enable him to continue with the good work he started, especially addressing the socio-economic and security challenges bedevilling the country.”