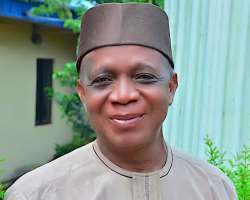 The founding fathers and members of All Progressive Congress[APC) in Ebonyi state have alleged that they have been sidelined in the affairs of the party ahead of the 2023 general elections in the state.

The founding members said that the new entrants in the party led by Governor Dave Umahi have hijacked the party and schemed them out.

Chief Paul Okorie, former Commissioner for Works and Environment in the state stated this while briefing journalists in Abakaliki, the state capital.

He condemned the endorsement of the Speaker of the state House of Assembly, Chief Francis Nwifuru by Umahi for 2023 governorship election in the state, describing it as unhealthy for democracy.

“How do you expect me to be comfortable that you are in a house and somebody came in to come and join you, you welcome him and he decided to hijack the house and took over everything?

“A governorship candidate of the party should emerge through open contest that is transparent and that is democracy. It is through only this condition that the very best can emerge.

“As we are getting into the election, we should be careful not to close political space against people. it should be thrown open so that everybody can contest and it will produce popular candidate”.