How Osinachi Nwachukwu Went To Heaven, Saw Jesus Telling Her To Pack And Go; Accounts Of Close Confidants Sister Ebube  and Mrs Idoko 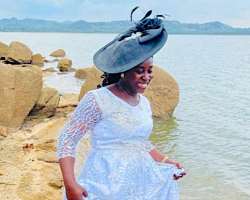 The death of Osinachi Nwachukwu, celebrated gospel artiste based in Abuja, shocked the whole country as well-meaning persons, including Senate President Ahmad Lawan; the Minister of Women Affairs and Social Development, Dame Pauline Tallen and top clerics, condoled with her family

Narrating her encounter with the late gospel music star before her death, Ebube, who was Osinachi’s close confidante and Mrs Idoko spoke separately to vanguard journalists, Luminous Jammanike, and said the deceased told her that if she didn’t make it in hospital, she would be fulfilled because she had done what the Lord asked her to do.

Ebube told Sunday Vanguard that Osinachi saw apparitions of Christ Jesus, a few days before she totally submitted to her Maker, asking her to start “packing” her things “for it is time to go “ to heaven. She added that she was sure the late gospel music artiste was in heaven.

I had written a piece,’ Gospel Singer Osinachi Nwachukwu; Martyed to Free Women from Bondage’ and I stated categorically that I saw Osinachi Nwachukwu in the realms of Peace and Glory. She went to Heaven, and I have been seeing her smiling spirit till today, 20th April, 2022. I stated in the piece of 13thApril that I have stopped crying for her since she has made it to realms of glory. Excerpts of my piece include:

“Gospel Singer Osinachi Nwachukwu was martyred by a wicked husband; she accepted martyrdom to free Christian women from oppressive, repressive and wicked husbands.

“Osinchi Nwachukwu has joined the fray. She knew that death was coming. Any saint about to die will have a hint. Death does not take them unawares. She forgave the evil husband who maltreated her for many years, prayed for her church, followers and brethren and gave up the ghost.

“For many days, I have been seeing her Spirit in a State of Peace. I still Saw Her Yesterday Smiling, Happy that She Has Made it to Heaven. Happy that She Has Escaped This Wicked, Deceitful World, into the Realms of Glory. Somehow, her smiling Spirit is still hovering, sending coded message to loved ones from the realms of glory. I will not reveal more than this. Since I started seeing her in that realm of peace and glory, I have ceased to be angry at her demise. I had the understanding that a martyr had gone home.

“The blood of Martyrs had always led to the deliverance of people all through church history. The death of Osinachi has become a fertilizing blood to free millions of Christian Women and Church Women from abusive, domestic marriage. Today they have a voice, their ordeal is appreciated, and public sympathy will stop many bestial men from taking their craft too far.

“The blood of a martyr and saint, Osinachi Nwachukwu, has been spilled; no Christian Woman is entitled to remain under the clutches of domestic violence. Rev Obinna Akukwe is asking all oppressed Christian women to make use of this opportunity of a soul that offered to die to help others, and ask God for freedom from individual cases of domestic violence”.

This lady Ebube, while corroborating my revelation that that Osinachi went to heaven, continued thus

“That same Thursday at the hospital, Peter (Osinachi’s husband) was so uneasy around her. He kept asking me ‘What was I doing in the hospital?’ The man kept reminding me that, hasn’t he asked me to always inform him before coming to see his wife?

“But Osinachi was playing her song ‘Nara Ekele’ that day. She told me twice she saw Jesus looking down towards her from above. Osinachi also said that she saw two pythons fighting around the hospital atmosphere and Jesus told her to start packing her things.

“I also remember that at the ‘Nations Worship’ programme where Osinachi ministered and said God told her to start packing, Peter didn’t want her to attend that programme because of a ‘picture issue’ at that time, but I told him that the people she was supposed to minister to will give their lives to Christ, that if they didn’t, God will hold him responsible. That was when Osinachi now came to the programme.

”The night before she died, Osinachi called me on phone and said: ‘Make fried rice for me’. I told her ‘Please, can I bring it the next morning, because I was just coming in that night?’

“She was now trying to say something, but the husband came around her screaming, ‘Rest, rest, rest!’ and we couldn’t continue the conversation. So, in the morning when I came, I met people crying.

“Osinachi is an angel and now dwelling among the host of angels in heaven. She kept talking about heaven. The last time I spoke to Osinachi I told her that she had to be strong for her children.

“I was actually the one who brought the buns Peter distributed to people after Osinachi died. I made the snacks for her children. I also brought the fried rice she asked for. I told the children ‘Your mother wanted fried rice, and that fried rice you will have’.

“I once told Peter to his face ‘Why is it that you don’t know how to manage people?’ I also told him that I was not happy with the way he was treating his wife.

“Rather than respond directly to me, he turned to Osinachi and started querying her, saying ‘So, you have started this ‘soul tie’ thing again?’ He also said that he had not fully succeeded in separating her from her twin sister, and now he has started another one with me.

“Peter used to tell Osinachi that it was he who made her a star and that he was like a Siamese twin to “daddy” (Pastor Paul Enenche). He also kept telling her that she was anti-social.

“This is particularly funny, because he is the one who is anti-social in many ways. He was merely projecting his self-image on her, but didn’t realise it. Peter doesn’t associate with people around him, but Osinachi is just a jolly good fellow.”

Journey to hospital
Speaking on Osinachi’s journey to the National Hospital in Abuja where she eventually died, Ebube said: “Despite having two functional cars, Osinachi was brought home from the Federal Medical Centre Abuja in commercial vehicle.

“She okay, but the next day, she called me again to say ‘Oga’ (her husband) was taking her to the hospital again.

“Later she told me that what they saw in her heart region were like blood patches and that she vomited blood profusely. I think they suspected cancer initially and did her biopsy, but the doctors didn’t find anything. God will use her case to set a lot of women free (from domestic violence).”

On Osinachi’s music, Ebube said the late gospel songstress also called her to say she dreamt and beheld herself passing on a microphone to her twin sister, Amarachi.

“Osinachi recorded about four or five songs before her death and gave them to me in a hard drive to upload on her streaming platforms, but Peter seized the hard drives and the songs,” she added.

However, Sunday Vanguard gathered that the producer of the unreleased works still had digital copies of the songs in his computer system.

According to her, Osinachi, under the influence of the Holy Spirit, once said ‘It was time to start packing our things to go’.

Idoko went on, “Yes, Osinachi told me she had a vision of two pythons were fighting and that she kept seeing some negative forces around the hospital. She also told me about another dream that she where she had handed over the microphone to her twin sister.

“To my surprise, when we came to their house on Sunday which was barely 48 hours after she died, Peter was sharing water, minerals and buns to us.”

According to Gracious, another worship leader in DIGC who met with Osinachi in hospital before her death, Peter (husband) did everything humanly possible to prevent her friends from visiting and praying for her on the sick bed.

“Peter told me to be calling him and not Osinachi directly, because I ‘know that she is sick’”, she said.

“But when I called Osinachi and finally got through to her, she told me ‘Don’t mind my husband. Just come to the hospital and see me.’ This was because she knew that every time I called to say I was coming to visit her in hospital, Peter will tell me not to come that he was not around.

“Even on the Friday that Osinachi died, before her demise, I told him (Peter) that I was coming around (hospital). He told me not to, because he was going out, but that he would call me when he returned.

“Peter didn’t know I was already in the hospital. He was so shocked and ashamed when he saw me right there. The nurses said Osinachi was just smiling and saying ‘Thank you, Jesus!’ before she died.”