AN APOLOGY TO WOLE SOYINKA 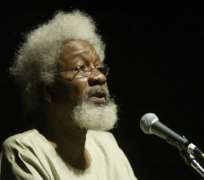 
Last Tuesday was the 76th birthday of Wole Soyinka, extraordinary dramatist, poet, professor of literature, renaissance man, and one of the world’s greatest humanists. I had intended to mark the occasion with a column celebrating Soyinka’s record of unstinting commitment to a Nigeria founded on justice and humane values. Sadly, I was unable to write last week.

Still, given my debt to the man, I thought it would be meet to say a few words, even if belatedly, both about an aspect of his meaning as well as the cruel paradox that Nigeria, in its current state, poses to Soyinka’s longstanding work.

Let me explain the tone of contrition in this column’s title. A few years ago, in the midst of yet another political crisis – it might have been Olusegun Obasanjo’s third term gambit, but I won’t swear on it – a friend of mine rang me up to vent. Midway through our discussion, he asked me a question along the (paraphrased) lines of: "Don’t you find it curious that Professor Wole Soyinka has not said anything? Why is he keeping silent?"

Irate, I barked my response to this interlocutor. "Why must you demand that Soyinka speak on every issue that crops up in Nigeria? Why don’t you speak on every political matter as you expect him to? You’re in your mid-forties, my friend. By his early thirties, Soyinka had held up a radio station to confront a corrupt federal government and its regional stooge. What exactly have we done? He was in his mid-thirties when he undertook the risky task of traversing several capital cities to voice the genocide in Nigeria, and to persuade western powers not to sell weapons to either side in the Nigerian conflict. Have you and I done anything to rival that in consequence and risk? For his troubles, the Yakubu Gowon regime threw him into solitary confinement. He came close to losing his life. What price have we paid?"

My friend was stunned into silence, but I was not done. "Soyinka," I continued, "took on the bestial machinery of the Sani Abacha regime. The regime wanted him dead – by any means necessary. Did you as much as mutter a word of criticism against Abacha when the goggled general was on the throne? Soyinka has confronted all the governments in Nigeria on their corruption and human rights abuses. How about you? Have you even mustered the courage to call out your local government councilor on his corruption? Soyinka has famously called his generation wasted. Our generation, yours and mine, is the wasting generation, but have you had the insight to recognize it or the intrepidity to state it?"

When he didn’t retort, I finished off by reminding him that, rather than censure Soyinka for failing to speak on some issue or other, we should be humbled by the scope and significance of the man’s personal investments in the idea of a Nigeria that matches its citizens’ loftiest dreams. We had not earned the right, I told my friend, to question Soyinka’s prerogative to choose not to weigh in on every subject under the Nigerian sun. Given the unrelenting cascade of crises in Nigeria, it’s practically impossible for any one person to maintain an unbroken record of commentary on every issue. "Above all, you and I owe the Soyinkas of Nigeria an apology. If we had followed their example, Nigeria would not have fallen into the callused hands of charlatans who daily ruin a country that has every reason to be great."

Soyinka’s example is, first and foremost, a deeply moral one. His effort to combat the reactionary forces that sought to subjugate the Western region in the mid-1960s is as instructive today as it was then. His act of derring-do in sabotaging a radio broadcast resonates with Nigeria’s persisting political malaise. If anything, Nigeria is in a far worse political condition today than it did in the 1960s.

Therein, I propose, lies a painful paradox. If a youthful Soyinka was moved in the 1960s to resort to extraordinary means of political resistance, how much more radical might our tools be today when, by most criteria, Nigeria is nothing short of a failed state? If Soyinka was riled then by the ruling party’s stuffing of ballot boxes, how about today when more "votes" are cast than there are registered voters, or when candidates with dubious mandates declare, with a straight face, that God gave them power?

Nigerian politics defies and debunks the evolutionary model. In the 1960s, men of towering intellectual or ethical capital – notably, Nnamdi Azikiwe, Obafemi Awolowo and Aminu Kano – dominated the Nigerian political scene. Today, men who were dismissed from the police force, convicted for petty theft in Nigeria and abroad, or flaunt questionable academic credentials, routinely smuggle themselves into high political offices.

In the 1960s, the political parties still understood the meaning of party manifestoes and programs. On the stump, candidates for political offices could be expected to speak not about their programs but also to articulate the nature of ideological differences between themselves and their opponents. Today, any ignoramus can run for office. Manifesto is a word now used exclusively by mugus who don’t understand that the import of political office is to cart away millions in security votes, fraudulent contracts, constituency allowances, and sundry bribes.

Nigeria’s political rhetoric has been distilled – dumbed down – to two or three facile phrases, easily digested by even the most ignorant candidates. The standard, pat answer to the question, "Why are you running for office?" is: "To move the nation (or state, or local government) forward," or "To deliver the dividends of democracy," or "My people asked me to run."

After Obasanjo and Maurice Iwu collaborated to shock and awe Nigerians with one of the biggest scams ever organized in the hallowed name of elections, I made a decision never to address Umaru Yar’Adua, the chief product of that scandal, as president. It was, I felt, my citizen’s moral protest – the least I could do to register outrage.

For if, nearly fifty years after Nigeria’s independence, forty years after an indignant Soyinka stormed a radio station, ten years after Abacha’s death, Nigerians are still denied the right to vote and have their vote count, then I was not about to dignify the chief beneficiary of that hollow, fraudulent exercise with the title he had usurped.

I stand by that policy. It is my modest way of expressing my deep debt to Soyinka, a man who has given so much to the possibility of Nigeria, but has been betrayed at every turn.