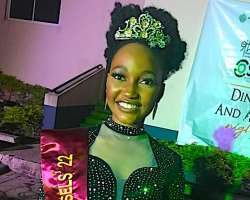 Precious Ashamu, a 400 - level student of Department of English in Joseph Ayo Babalola University, has emerged the winner of Southwest Conference of Students of English and Literary Studies (WESTCOSELS) Beauty Queen for the year 2022.

The beauty pageant which was the grand finale event in the four days mind-blowing programmes of the regional conference, was held at KolaDaisi University, Oyo, Ibadan on Thursday night.

WESTCOSELS, as a regional body, is an avenue where students of English and Literary Studies across the Sourthwest region of Nigeria converge in any of institutions in the region for four days (Monday to Thursday) with different extensive, interactive and educative sessions and programmes. The conference which is always accompanied with a lot of jaw-dropping events which include bonfire, conference lecture, touring amazing places, Owanbe night, talent hunt, entrepreneurship, dinner night, award presentation, among others, remained one of the significant students' associations social events.

Speaking at the event, the Regional Director of the Association, Comrade John Patrick, described this year's conference as a major success of his admistration and he felt fulfilled.

In an interview with Miss Precious after she was declared winner, she was full of joy and delight for her emergence as the new Queen/ Face of WESTCOSELS, while noting that she had not expected to be the one to wear the crown of the Association.

In her words; “I'm so happy because this will be the first time I'm actually participating in a pageant. I wasn't expecting to win... But, I'm happy and very grateful.”

Miss Precious also expressed gratitude to the Regional Executive of the Association for their efforts and commitment in making the event an unforgettable memories for her. Similarly, Omotosho David, a 200 level student from Obafemi Awolowo University championed the male category of the contest, and emerged as the King of WESTCOSELS 2022.

In the same connection, the Mr NASELS, Nigeria, Comrade Yinka Akinwade who was the chief judge at the beauty contest, noted that both the new King and Queen of WESTCOSELS will be given a N100, 000 worth contract where both King and Queen will be receiving monthly allowance as stated in the contract they had earlier signed.

Meanwhile, Makinde Ifeoluwa Elizabeth, a 300 Level student in Obafemi Awolowo University emerged as the first runner up in the female category.