OUR ORDEAL, BY FREED JOURNALISTS 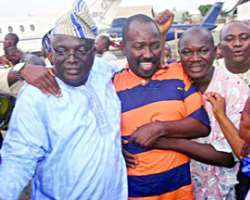 Chairman, Lagos State Council, Alhaji Wahab Alabi Oba (left), being received by his vice, Mr. Deji Elumoye and others at the Murtala Muhammed Airport , Ikeja after their release by the kidnappers in Abia early yesterday.

The four kidnapped journalists and their driver, who were abducted eight days ago, were released in the early hours of Sunday in Ukpakiri in Obingwa Local Government Area of Abia State.

However, before their release, the journalists were robbed of their belongings, including slippers and shoes and the sum of N3 million found on them. They also lost the Toyota Sienna bus in which they travelled, to the kidnappers.

Looking unkempt, the victims expressed happiness that they came out alive to meet their colleagues and reunite with their families.

The Lagos state Chairman of the NUJ, Mr Wahab Oba, who narrated their ordeal said they stayed in the kidnappers den with their hopes rising and falling. Shortly after, they were brought to the Police headquarters in Umuahia by a team of policemen.

According to him, the victims were called up at about 1.30 am on Sunday and informed that they were to be released. 'We were dropped in a bush in the area. But we came out of the bush around 6.a.m. and walked into the community. Oba, said 'we had to lie down inside the bush untill 6 am when we called the attention of some people in the area who took us to the community leader who later handed us over to the police when we told them that we were the journalists that were kidnapped. He said the abductors collected all they had on shared among themselves there and then.

Even though they were not maltreated by the men who seized them, the Lagos Council Chairman said they were completely blindfolded and kept under trees where they were either drenched by the rain or beaten by the sun, including their abductors. 'They kept moving us every two hours due to the pressure from police and security operatives and we were blindfolded each time. So, we did not know where they were taking us to at any point in time.'

The Lagos NUJ boss narrated further, 'the youths told us that they were only agitated by the affairs of the state, but not interested in the N250 million ransom they requested for.' They called on the Federal Government to adequately equip the police, to make them battle ready for the kidnappers, considering the sophisticated weapons they had. 'All the guns I am seeing with the police here are the least we saw with these boys, who were just in their twenties. Only one of them looked like a 30 year old.'

Also speaking, Abia State NUJ Chairman, Mr Hyacinth Okoli commended the police and government for their efforts in ensuring the release of the journalists. He disagreed that the kidnappers were in crime because they were angry with the government. 'This is a case of people who have resolved to commit crime since they failed to key into the state government's amnesty programme,' Okoli said.

Oba said that no ransom was paid to the kidnappers, but disclosed the hoodlums collected about N3 million they had on them. He said, they also lost wristwatches, laptops and other valuables, which the abductors shared among themselves.