Orji Kalu In Limbo As Abia PDP Rejects His Return 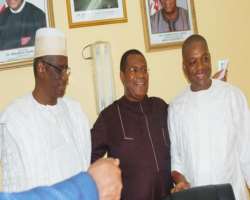 
ABUJA, July 17, (THEWILL) - Former Governor of Abia State and erstwhile Chairman of the Board of Trustees of the defunct Progressive Peoples Alliance, PPA, Chief Orji Uzor Kalu has had his planned smooth return to the Peoples Democratic Party, PDP aborted as the party’s stakeholders in the state have resolved not to allow him in.

They were resolute as they put pen on paper before the National Chiarman of the party, Dr. Okwesilieze Nwodo at a stakeholders meeting with the national leadership held at the Transcorp Hilton Hotel, Abuja last night.

They premised their objection to his entrant, to the fact that he (Kalu) is a personification of ‘misgovernance, rapacity, impunity, and ruin of the economy.’

Rising from the meeting with the National Chairman of the party, Dr Okwesilieze Nwodo which lasted into midnight, the State Executive Committee of the party led by its Chairman, Chief Sir Ndidi Okereke and Secretary, Solomon Ogunji said Kalu’s ‘past political activities has shown a repudiation of the core values of the party and that his readmission will negate party discipline and cohesion as contained in Article 6 of the party’s constitution’.

They further noted that the ‘repulsion of Abia indigenes and residents over news of his re-admission into our party in which they have invested hope considering that he personifies all that is negative in terms of development, making his presence a sour taste.’

The stakeholders in the 8-point resolution, which Dr. Nwodo assured would be forwarded to the National Working Committee (NWC) and the presidency, averred that; "In a state which has produced political heavyweights including a former senate president, a former national chairman, two former national secretaries as well as serving and former ministers, two serving and former senators and six present members of the House of Representatives, all of whom are still party members, issues affecting the party in the state ought not to have been initiated and/or concluded without consultation with the state party.

Recall that last Monday Kalu had led some members of the PPA including the Deputy Governor Mr. Chris Akomas to the national secretariat of the PDP, boasting that he was not ashamed to return to the party.

The copy of the resolution which was made available to THEWILL titled, "Resolution by the State Executive Committee and Stakeholders on the state of PDP Abia State and the Attempted Return of Chief Orji Uzo Kalu and other decampees to the Peoples Democratic Party" was jointly signed by the state chairman of the party, Chief Sir Ndidi Okereke and the secretary, Solomon Ogunji.

Also appending their signatures to the resolution at the meeting were, Former National Chairman of the party, Prince Vincent Ogbulafor; former Minister of Foreign Affairs and former national secretary of the party, Chief Ojo Madueke; former governorship aspirant, Chief Onyema Ugochukwu; Former minister and chairman of the reconciliation committee of the party, Senator Ike Nwachukwu; and Minister of the Labour and Productivity, Mr. Emeka Wogu.

However it was gathered that three governorship aspirants at the meeting namely; Reagan Ufomba, Henry Ikoh and Ikechi Emenike declined to sign the resolution. There were speculations that these three politicians were planted by Orji Kalu.

The highpoint of the meeting was news from insiders in the meeting that the Deputy Governor of the state Chris Akomas, who also was received at the national secretariat of the PDP last week was not allowed to enter the meeting venue as he was asked to leave the premises since he is not a member of the party. The same treatment was meted to some other PPA members including Sam Nkire and Kelvin C. Ugboaja who were ejected as soon as they relaxed into their seats.

The resolution reads in part; "That the party is not opposed to the return of decampees but that such return must be in accordance with the article 10b sub (iii) which leaves the chapter with the discretion to accept the return or not, considering the character and political antecedents of the returnee.

"That it is on this basis of the aforesaid provision of our constitution that the Abia State chapter rejects the return of Chief Orji Uzor Kalu and declines to recommend his re-admission to the national working committee on the following grounds.

" That the repulsion of Abia indigenes and residents over the news of his readmission into our party in which they have invested hope considering that he is the personification of misgovernance, rapacity, impunity, and ruin of the economy and security of the state."

However, a source at the meeting revealed that the national chairman, Dr Nwodo received the resolution and assured the state party that it will be presented to the National Working committee of the party on Wednesday for deliberation.

"The national chairman in his response said he will henceforth transmit the Abia message which is that there must be sanctions for impunity and wrong doing by the party." It is a message to others, and in fact the public have been waiting thinking that the state would not do anything. It shows that the era of rewarding impunity and ineptitude is gone for good in the party", he was quoted to have said at the meeting.

The Bende Local Government PDP where Orji Uzor Kalu hails from had in a statement by its chairman Engr Ekekwe Ejiagba, disclaimed Orji’s return to the party saying that the party was not aware that Kalu is a member and as such has not returned to the PDP.