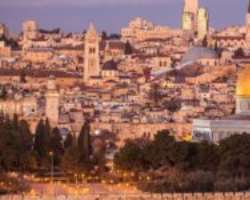 According to the Rabbinate, “the presence of Israelites along the Niger River had been known by Jewish authorities in the United Kingdom, the Netherlands, Lithuania, and Suriname.

Rabbinic letters addressed to the Igbos by Chief rabbis: Dr. Solomon Hershel Lewin, David Meldola, and the Gaon of Vilna (Elijan Zalman), support the idea that there was contact between European Jewish communities and Igbo Israelites. All of the correspondence from the aforementioned rabbinic authorities address the Igbos as “brethren of the Children of Israel.” Accordingly, there is no doubt of their origins, nor of their halakhic status as Israelites.”

According to the Rabbinate, while there is yet an exhaustive academic genetic study of the Igbos, the data of the majority of those who have reported their autosomal and y-chromosome DNA, supports that their ancestors migrated from the Levant Basin, sharing genetic links with Sephardic and Ashkenazi Jews alike.

The Rabbinate noted the fact that rabbinic authorities during the Songhai Empires were aware of Israelites in Igboland, which leads to the logical conclusion that they treated Igbos as Israelites.

The final conclusion of the Obadya Alliance Rabbinate was that “Igbos are to be treated as Israelites, in every sense of the word, and also their priestly and Levite lineages should be upheld as valid.”

The Rabbinate advised that upon the return of the Igbos to Omenana (what you do in the Land), they should be circumcised [if they hadn't performed it already], say the sheheḥeyánu afterward, and partake in the kola nut ceremony with their brethren, as is customary among Igbos.

As democracy is under assault, the Igbos are democratic to the core and stand out as the most culturally democratic ethnic entity globally. The world may have a look at the Igbo traditional system of government, which has survived despite many years of British rule and Nigeria's deliberate marginalization.

It is interesting that the Obadya Rabbinate addressed Igbos as Israelites, not as Jews. They also affirmed Omenana (what you do in the Land) as the authentic original religion of the children of Israel.

Dr. James Horton Africanus Beal had, in his 1868 book, West African Countries and Peoples, British and Native: And a Vindication of the African Race, described Igbo religion as Judaism mixed with pagan practices.

In another book, The story of the Niger: A record of travel and adventure from the days of Mungo Park to the present time, Published 1888, author Robert Richardson observed, “The religion of the natives is almost pure idolatry, but some slight traces of Judaism may be discovered in it – a circumstance which seems to indicate that some stray wanderers of the Hebrew race must long ago have found their way to these regions, and in the gradual course of time become assimilated to the natives both in appearance and customs, leavening the races around them, however, with a few of their own ideas.”

With this validation of Omenana as Israelite religion, Jewish and Igbo scholars should come together to fill in the gaps created by years of exile between Omenana in Africa, and Judaism in Europe. With Omenana poised to go mainstream, this learning process between Jews and Igbos would be invaluable for both groups, as they compare notes, as there could well be traces of Christianity in both modern Judaism and modern Omenana.

The Igbo Osu practice (Nethinim), which is rooted in Omenana has been both obdurate and pertinacious to modern Igbo society. These were temple servitors known from the books of Ezra, Nehemiah, and Chronicles. Scholars are divided as to whether they were actually slaves or property of the Temple. While Ezra 8:20 says that they had been set apart by David “to attend the Levites,” 1Chronicles 9:1-2 describes them simply as servitors like the Levites. To the Igbo, Nethinim or Osu are a “caste” that should not intermarry with free-born Igbo. Unfortunately, despite 200 years of Christianity in Igboland, with the creed “There is neither Jew nor Greek, slave nor free, male nor female, for you are all one in Christ Jesus” (Galatians 3:28), the Osu still suffer discrimination.

The Igbos may learn how to solve the Osu problem from the Jews. Since Christianity did not solve this problem, maybe Judaism will. For someone who has worked on this subject for decades, digesting this ruling and its ground-shattering significance would be like peeling the multiple layers of an onion, with tears in your eyes. The most significant, in my opinion, is that the genocide against the Igbos between 1969 and 1970 would now be addressed as genocide against Israelites, highlighting the shared destiny of both Jews and Igbos as descendants of one father, Jacob, whom God renamed Israel.

The Igbos have suffered more genocide, perennial massacres, ethnic cleansing, discrimination, and marginalization in Nigeria. Igbos are perceived as a market-dominant minority, a resented “outsider” ethnic group. In a White House memo dated Tuesday, January 28, 1969, to President Nixon, former Secretary of State, Henry Kissinger described the Igbos as “the wandering Jews of West Africa, gifted, aggressive, westernized, at best envied and resented, but mostly despised by their neighbors in the federation.” Just as the world was called upon to answer the Jewish Question, the world has neglected to even entertain the Igbo Question. My hope is that this ruling may draw global attention thereto.

The ruling was signed by Dr. Dayan Yehonatan Elazar-DeMota, who has a Master's degree in Anthropology and Religious Studies from Florida International University, and a Ph.D. in International Law from the University of Amsterdam.