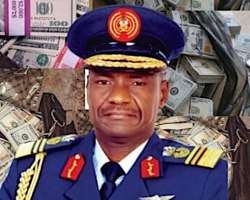 Justice Inyang Ekwo, in a judgment, held that the prosecution had failed to prove the essential ingredients of the charge.

According to Justice Ekwo, I find that the prosecution has failed to prove counts one and two on the charge sheet beyond reasonable doubt.

“Therefore, the prosecution has failed to discharge the burden of proof as required by law in this case.

“The cardinal principle of law is that the commission of a crime by a party must be proved beyond reasonable doubt.

The News Agency of Nigeria (NAN) reports that the Office of the Attorney-General of the Federation (AGF), on behalf of the Federal Government, had sued Mohammed and his company, Easy Jet Integrated Service Ltd, as 1st and 2nd defendants in the money laundering suit.

NAN reports that Mohammed and his company, were prosecuted on five counts of money laundering, illegal possession of firearms and possession of classified documents without lawful authority.

He and his company were accused of accepting one million, thirty thousand dollars ($1,030,000) of one hundred dollars ($100) denomination in cash from a firm, Worldwide Consortium PTY Ltd “as payment for flight services” without going through a financial institution as required by the Money Laundering (Prohibition) Act.

The government also accused him of having in his possession, at his No: 4, Lungi Close, Mississippi, Maitama, Abuja home, “classified/official documents without lawful authority and thereby committed an offence contrary to Section 1(1)(b) of the Official Secret Act and punishable under Section 7(1)(a) of the same law.

Mohammed was accused of being in illegal possession of two pump action guns (marked: SBSG Magnum 397 and SBGS Interpress 09-1573) between June 1, 2011 and June 19, 2016 without valid licences thereby committing an offence contrary to Section 4 of the Firearms Act 2004 and punishable under Section 27(1)(b)(i) of the Act.”

The retired officer, who was a member of the defunct Presidential Investigative Committee on Procurement of Arms and Equipment in the Armed Forces set up by President Muhammadu Buhari shortly after assuming office as President in 2015, had pleaded not guilty to all the charges.

In the course of the trial, the AGF called a sole witness (PW1), Stephen Olatubosun, who is a State Security Service (SSS) official.

While testifying in court, Olatunbosun, who produced the currencies in court, said the monies were recovered from Mohammed’s residence and was crossed examined by the defence lawyer.

However, after Mohammed was led in evidence as first defence witness (DW1) and a sole witness in his case, the prosecution closed their case without cross examining him.

Delivering the judgment, the judge noted that at the conclusion of the case of the prosecution, the defendants entered a no-case submission which was overruled, and they were ordered to enter their defence with respect to count one and count two which bordered on money laundering.

According to Ekwo, the evidence of DW1 (Mohammed) on these issues is that he is a businessman and is into the business of oil and gas both upstream and downstream, aircraft charter and aviation, air cargo both local and international.

He noted that Mohammed had said that the money found in his residence was his personal money used in his business.

“The prosecution did not cross examination DW1 after his evidence in Chief, instead, applied to close his case.

“I agree with the learned Silk of counsel for the defendants that the evidence of DW1 not having been controverted is deemed as admitted. This is the position of the law.

“The position of the law as settled in many authorities is that evidence adduced in court, that is relevant to the issue in controversy, and has neither been challenged nor successfully debunked becomes good and credible evidence, which ought to be relied upon by a learned trial judge,” he held, sitting previous cases to back the ruling.

The judge further held that “in criminal cases, failure to cross examine a witness on vital evidence elicited during examination in chief is fatal as the prosecution has no other method of disputing such witness or his evidence save by cross examination.”

Ekwo said the proper course was to challenge the witness while he was in the witness-box or at any rate to make it plain to him at that stage that his evidence was not accepted.

“The vital ingredient in count one which is the allegation of conspiracy was for the prosecution to establish beyond reasonable doubt how the 1st defendant conspired with the 2nd defendant to accept the sum of $1, 0 30, 000 in cash from Worldwide Consortium PTY Ltd, as payment for flight services without going through a financial institution as required by the law.

“In fact, Exhibits PW1-C1, PW1-C2, and, PW1 -G tendered before this court are not even mentioned in any of the counts in the charge sheet.

The sum of $1,030,000) mentioned in count one was never tendered in this court through out the length and breadth of the proceeding.

“Now, if the money was never tendered in court, it suffices to say that there was no offence in the first place,” he stated.

Justice Ekwo also said the prosecution could not establish the necessary ingredients in count two.

“On the whole, I find that the prosecution has failed to prove counts one and two on the charge sheet beyond reasonable doubt.

“Therefore, the prosecution has failed to discharge the burden of proof as required by law in this case.

“Where at the conclusion of trial, the prosecution has failed to prove the essential ingredients of a charge, thereby leaving any doubt in the mind of the court, the court is bound to resolve the doubt in favour of the defendants.

“As it is, the doubt in me is resolved in favour of the defendants and I so hold.

“I make an order discharging and acquitting the defendants in this case.

“This is the order of this court,” he ruled.