I WAS MISLED ABOUT PROPHET T.B. JOSHUA, SAYS ENDTIME PUBLISHER

By The Punch Newspaper, Nigeria 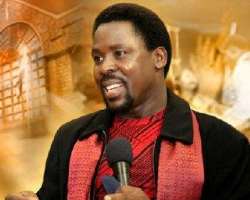 The publisher of ENDTIME Journal International, a Christian journal, Dr. David Lucas, has said he was misled by one of his assistants (name withheld) over alleged malicious publication against prominent clergymen in the country. He said this at a press conference at Faith Revival Assembly Church on Friday.

“I have decided to apologise to all those wronged in our reports. However, my vision from God since in my college days was to report the activities of the churches and unveil their doings. It is unfortunate the revelation turned out to be false. Right now, as I speak to you, he is cooling off his heals in police detention. He caused all the problems. I did not have to doubt his revelation since he is an apostle of Christ Apostolic Church in Egbeda, Lagos.”

He said inasmuch as most of the reports were not true, he insisted that some were real, but did not shed much on those he claimed were true. He asked readers to discountenance most of the reports in the volume, saying that they were false. The journal had in its vol. 14 numbers 6 and 9 alleged that some prominent 'Men of God' were diabolical, occultic or randy.