Edwin-nwoñu Condoles Felix Igwe On The Transition Of His Mom 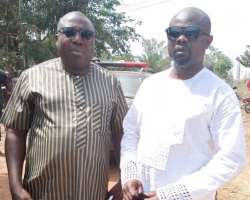 The leading contender in the forthcoming 2023 governorship election in Ebonyi State, Rt. Hon. Anayo Peter Edwin-Nwoñu, has condoled his friend and ally, Mr. Felix Igwe, on the transition of his beloved mother, Late Mrs. Florence Dele Igwe Nome. Late Mrs Florence Dele Igwe Nome who was the matriarch of the Igwe Nome family of Eguazuwhu Amana in Ezza South Local Government Area passed on to eternal glory at the age of 71.

RT. Hon. Edwin-Nwoñu who is the chairman of the House of Representatives Committee on Reformatory Institutions was on ground in Eguazuwhu Amana with his teeming supporters to witness the burial of the late sage which held on 28th December, 2021.

In his condolence message to the family after the burial, the lawmaker who represents Ezza North/Ishielu Federal Constituency in the National Assembly said, "On behalf of the good people of Ezza North/Ishielu Federal Constituency, I wish to convey my heartfelt commiserations to you over the demise of your mother, Late Mrs. Florence Dele Igwe Nome at the age of 71 years.

"Accounts of her lifetime indicate that she was a quintessential mother and devout Christian of the Catholic faith. She will always be remembered for her life of sacrifice and philanthropy which I am sure will in return attract enormous goodwill to you.

"As you commit her mortal body to earth, I pray God to grant her eternal rest and your family, the grace to bear the loss with fortitude", the lawmaker concluded.

The burial which was preceded by a valedictory mass celebrated by the Catholic Church was attended by people from all walks of life including Prof. Philip Omoke, Prince Uche Ekuma and others.