Victim Hospitalized From Abortion Procured By His Last Wife 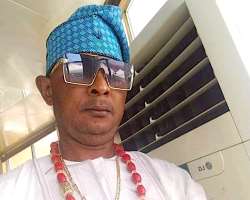 The officials of the Advocate for Children and Vulnerable Persons Network in Lagos has stepped up effort to save the life of a thirteen year old house maid who was imprenated by her Madam's husband. The despicable journey of the victim began when she was engaged by the last of the seven wives of Johnson Oluwole (aka Kazeem Ayemojuba), an OPC commander incharge of Ajegunle area of Lagos, Wuraola Ibrahim.

The 55-year-old Ayemojuba whose source of livilihood we learnt was through extortion of traders in Boundary market in Ajegunle, Ajeromi Ifelodun local government of Lagos, took an undue advantage of his house maid. After several forceful sexual abuses, the 13 year old house maid was impregnated by a man with seven wives, 36 children and numerous sidechicks.

Wuraola Ibrahim, in conspiracy with her husband, Johnson Oluwole (aka Kazeem Ayemojuba), decided to terminate the pregnancy of the vulnerable underage maid. They hatched a plan to contact the local and neighbourhood 'patient medicine' dealer, Olaseinde. In the course of procuring an illegal and crude abortion, complications of life threatening degree occured. The girl's life was in danger as a non-stop bleeding, resulting from the crude administration of concortion by Olaseinde (neighbourhood chemist) took a bad turn.

According to Olaseinde: “Ibrahim brought the victim to my chemist alleging that her younger sister was pregnant and that she wanted the pregnancy to be removed. “I didn’t know the victim was her maid or that it was her husband that was responsible for the pregnancy.” Johnson Oluwole (aka Kazeem Ayemojuba), who is said to be influential among politicians, the high and mighty in Lagos environ has fled the community after the secret affair was blown open. It is reported that he is so influential that witnesses are scared to testify against him. There is a strongly held opinion in the community that he is a patron to one of the deadliest cults, the 'Aye fraternity', in addition to being e feared OPC commader. Even at the assumption of his being at large, he is regularly sighted every night around boundary market area in Ajegunle. The security operatives are also said to be scared of him; however, the Advocate for Children and Vulnerable Persons Network are determined to unmask the big masqurade with the pending case.

Operatives of the Lagos State Police Command are currently investigating the housewife, Wuraola Ibrahim, and a chemist identified simply as Olaseinde for procuring an unsafe abortion for a 13-year-old victim (names withheld) in the Ajegunle area of Lagos.

Confirming the arrest, Spokesperson for the Lagos State Police Command, CSP Adekunle Ajisebutu, said the main suspect is currently at large. Ajisebutu added: “However, two suspects have been arrested in connection with the crime.

“The case has been transferred to the Gender Unit of the Command on the directive of the Commissioner of Police, CP Hakeem Odumosu, while the victim is receiving treatment in the hospital.”

This is not the first of his involvement in such act “But the problem is that the family of his victims are usually scared to seek justice as he is the OPC commander in the community.” a community member stateted.