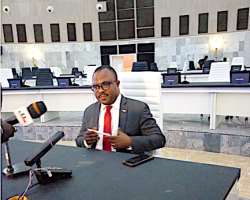 As Governor David Umahi prepares to present the 2022 budget proposals to the State House of Assembly, the State Executive Council on Friday, approved the downwards review of the 2021 budget.

The development, coming in less than two months to the end of 2021 fiscal year, was part of outcome of the State Executive Council Meeting held at government house, Abakaliki.

Briefing journalists at the end of the meeting, the Commissioner for Information and State Orientation, Barrister Uchenna Orji, explained that the review was as a result of paucity of funds to drive the budget as it were.

He noted that the said budget tagged Budget of Stabilization and Consolidation in a recession, was reviewed from the initial N122 billion to N99 billion, adding that the review would soon be transmitted to the State House of Assembly for necessary legislative action.

Orji said: "Exco did consider and approved the review of 2021 budget tagged budget of Stabilization and consolidation in a recession.

"The decision shall be communicated to the State House of Assembly for necessary legislative processes."

Orji further told newsmen that members of the State Executive Council has been mandated to monitor and supervise the operations of some Ministries and departments charged with providing certain basic amenities to the people, in order to ensure efficiency.

He explained that an Executive Council Committee on Supervision of Public Utilities was set up to drive the mandate.

Orji explained further: "Exco did constitute an enlarged Exco committee made up of Commissioners, Senior Special Assistants and Special Assistants, to monitor and supervise the operations of the Ministries of water resources, Power, Environment, and also the Ebubeagu Security outfit.

"And in doing so, they are required to move to the field, especially in the nights to ensure that the relevant MDAs are out to task in their mandate of providing efficient service to the people of Ebonyi State.

"It is a Committee made up of every member of Exco, and it is grouped in such a way and manner that every night, a group must go to the field to know what is happening in these Ministries and report to Executive Council."