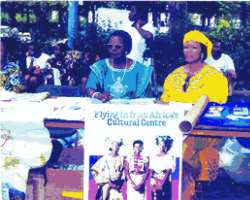 Apparently intrigued by a passion to strengthen cultural diplomacy between Nigeria and the United States US, the Federal Government may soon establish an international arts centre in Atlanta, Georgia.

This is the fallout of a recent meeting hosted in Abuja by Alhaji Abubakar Sadiq Mohammed, Minister of Tourism, Culture and National Orientation, and graced by officials such as Prof Tunde Babawale of the Centre for Black and African Arts and Civilisation (CBAAC), Ministry of Foreign Affairs, the Nigerian Embassy in the United States as well as Mr Thomas Okpaku, who forwarded the proposal to the Federal Government four years ago.

While stressing Federal Government's preparation to lay the foundation of the proposed centre soon, Mohammed recalled the proposal which was sent in and adopted during the Obasanjo administration. He noted that a new opportunity has arisen under the incumbent government to execute the project.

Said the Minister; ' Now, we have an opportunity to make a mark by laying the foundation for the centre that would change the world perception about Nigeria. We are fully in support of it because a US-based culture centre will put Nigeria on the world map while the mini ones in other countries will compliment the one in America'

Courtesy of CBAAC and the ministry, Nigeria had already established culture houses in Brazil and China. Another culture village was put in place in South Africa by the Otunba Segun Runsewe-led Nigerian Tourism Development Corporation (NTDC) to boost Nigeria's image during the just concluded FIFA World Cup. But the proposed centre in Atlanta is expected to assist Nigeria in showcasing its rich cultural heritage to the globe aside providing opportunities for research and exchange programmes.

In a chat with Barrister Okpaku, Daily Sun leant that the centre would be of great historical significance for all Africans. It would also expose African arts, culture, music, civilization and development not only to African kinsmen in Diaspora, but also to the West, such that it would promote cultural, trade and business partnerships between America and Africa.

As part of the projections for the centre, Okpaku said that it would house a permanent museum displaying replicas of the greatest collections of African arts from across Africa. It shall also house a library and a research centre with the largest collections of works and materials on and by people of African descent all over the world.

Said Okpaku; 'The centre will promote summer exhange programmes between the people of America and artists, students, scholars and professionals in Africa or the Caribbean to promote cooperation, exhange of ideas as well as offer opportunities to see and experience other people's world away from propaganda and stereotypes.''

Also, the centre would bring about a psychological upliftment and rebirth in the psyche of people of African descent on the need to discover their history, culture and identity in America. And for those who may not be able to visit Africa, the center would bring the African and black world to them in Atlanta. And above all, the center plans to hold the next FESTAC (World festival of arts and culture) which would involve participation of all African countries, aside having a department that would be dedicated to women in development to deal with issues of public health, education, war and peace, conflict resolution and post conflict resolution, good governance, rule of law and democracy.

And as strategy to actualize these dreams, the Osun State government has also teamed up with reputable organizations like the UNESCO, CBAAC, Centre for Black Culture and International Understanding (CBCIU) to host the first Global Conference of Black Nationalities between August 23 and 27 in the state. While the state government has concluded plans to make the event memorable for the entire Black race home and abroad, the intellectual arm of the conference is being anchored by the Federal Ministry of Tourism, Culture and National Orientation, NCMM and CBAAC, and is slated for Ilogbo - Ijesha, Osun State.

In an address by Professor Abi Derefaka, chairman of the organizing committee of the colloquium, the International event tagged Slavery, Slave Trade and their Consequences shall hold between August 22 and 26. Said the chairman ' The colloquium is another way of remembering our heroes and celebrating those emancipation effortson the long wlak to freedom. It is also to commemorate the UNESCO International Day for the abolition of slavery on August 23. The UNESCO slave routes project team is part of this projecxt and the International Scientific Committee on UNESCO slave route project shall meet during the colloquium.''