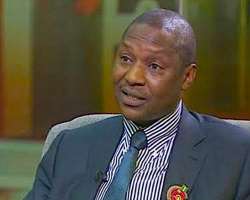 Conference of Nigeria Political Parties (CNPP) has reiterated the call for the separation of the office of the Attorney-General and that of the Minister of Justice.

The CNPP, while reacting to the accusation by the Nigeria Governors’ Forum against the Attorney-General of the Federation and Minister of Justice, Abubakar Malami over his special interest in the controversial $418m refund requested by consultants with respect to the Paris Club refund.

The umbrella body of all registered political parties and political associations in the Nigeria also backed the governors of the 36 states of the federation on the the accusation that Mr. Malami has more than passing interest in the in the money.

In a statement signed by its Secretary General, Chief Willy Ezugwu, the CNPP said the insistence by the Federal Government through the office of the Attorney-General Office and Minister of Justice that the deduction was lawful is loud enough to convince any discerning citizen.

The CNPP noted that despite the fact that a Federal High Court sitting in Abuja had on Friday barred the Federal Government from deducting $418m from the bank accounts of the 36 states of the federation, the Attorney-General Office and Minister of Justice has continued to insist on the deductions.

“If there is a time the office of the Attorney-General and that of the Minister of Justice should be separated, it is now.

“Mr. Malami has made several utterances that have portrayed him as a biased Chief Law Officer of the federation”

“The CNPP therefore stand with the Nigeria Governors' Forum on their position that Mr. Malami has a vested interest in the money being requested by the consultants”, the CNPP stated.