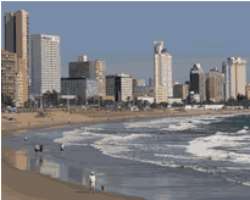 South African citizens don't hide their love for Nigerians. They express it the moment they meet you. And the Nigerian Nollywood industry has further endeared Nigerians to South Africans, who are quick in asking one of the likes of Aki and Pawpaw, Ini Edo, Segun Arinze etc.

But one thing that is now a big minus for Nigerians and the image of the country, especially in the KwaZulu-Natal Province, is the kind of business Nigerians do in places likes Durban, Richards Bay, Empangeni and the other towns in the entire Zululand.

Any decent South African you come across, has one complain to make on the kind of business the Nigerian brothers are into. They are not happy that Zululand has become the haven of drugs no thanks to the activities of a Nigerian 'Mafia' that hawks drugs in pubs, restaurants, work places, private homes, just everywhere.

A lady, Mphume, who works at the Richards Bay harbour, was the first to draw the reporter's attention to the drug problem in Zululand and the involvement of what she called 'your Nigerian brothers.' To buttress her claim, Mphume urged me to visit any of the pubs in Richards Bay and see things myself. Though for security reasons, I was reluctant to visit any of the 'happening places' in the small, but beautiful city of Richards Bay, I had to hit one of the clubs run by Indians, ostensibly to confirm the claim by the Zulus that a handful of Nigerians had turned their enclave into a land of drugs.

My visit to the Indian pub very close to Richards Bay City Mall was to say the least, a shocking experience. For the first time in all my life, I saw what cocaine looks like. Some young men sold the powdery substance in wraps and a wrap went for 300 Rands (about $50). However, one was free to negotiate the price. To confirm if the dealer I was negotiating with was a Nigerian, I spoke Igbo language to him and asked him to come down a bit, since 300 Rands for me was on the high side.

'Nna, iga egbu tu onu ya,' which literally interpreted means: 'My brother, you have to bring down the price.' From the response I got, I never needed a soothsayer to tell me I was negotiating with a Naija man. I was told by the young man who should be in his early 20s to bring whatever I had in my pocket. I told him that I would be back, but instead of returning, I beat a quick retreat with my South African guide, Thanda, with whom I visited the pub in the light of day.

While driving back to my Road Lodge Hotel abode, Thanda told me that what I saw was only a child's play. He said the drug business thrives more at night alongside prostitution with girls aged between 16 and 25, not just selling their bodies, but also serving as drug hawkers. Few days after seeing things for myself in the pub, Zululand Observer (ZO) carried a front page lead story with the headline: 'Drug-drenched Zululand', with a kicker: 'Influx of Nigerian 'Mafia' causes mushrooming drug trade'.

The paper, in the special report, disclosed that an exclusive Nigerian cartel of between 20-30 dealers had in the last three years established a well-oiled drug distribution network. An insider told the weekend tabloid that the dealers operate with a free hand owing to significant police complicity. In the words of the insider: 'The dealers fear nothing, not the cops, not arrest… They pay the bribes and move on with their business undisturbed.'

Continuing, the insider, who pleaded anonymity said: 'The drug network even has policemen in the loop as part of their transport logistics. The dealers are fed intelligence reports about road blocks when drug runs are planned from the main supplier routes in Jo'burg and Durban.' On the question of how rife the drug addiction problem in Zululand really is, the insider told ZO that the extent of the abuse would come as a shock to the public.

'It's everywhere… Apart from teenagers and young adults, the number of well known professionals and businessmen hooked on expensive drugs is alarming. They are busy destroying themselves and their families. Some professionals have already lost their businesses, others are on the brinks and many more are busy secretly raiding business or company funds to sustain their habit.'

As this writer can confirm, and as rightly reported by ZO, the era when dealers hid in dark places to do their trade is gone. A source told the reporter that the Nigerian dealers, who before now sneak in from Durban or Jo'burg, are now residing in Richards Bay and other suburbs like Empangeni, St Lucia and Mtubatuba. Some of them, in a bid to regularise their stay, have gone ahead to marry South African ladies.

'The drug dealers are highly organised. Getting cocaine or heroine is like ordering a take away pizza. You pick up the phone and they deliver it to your door step,' another source told ZO. The drug barons appear to be having a field day in Zululand because the local police in the province do not have a drug enforcement unit. In response to public criticism about the perceived lack of police effectiveness, head of visible policing, Col Danie Calitz, told ZO that trafficking depends on detection.

In the words of the police chief: 'SAPS (Police) is busy with several drug hot spot observations. We obviously cannot reveal details of that type of operation due to the fact that it could end up in wrong hands. If you do not find drugs on a person when you arrest him, you have no case.

'Our justice system also needs to be incorporated into the problem. As for prostitution, an average of 50 prostitutes per month are arrested, and then released again by the courts and are back on the streets. Many fingers are pointed towards the police as being corrupt, but society itself does not want to take responsibility. Drug abuse is a social problem and good value systems start at home.'

In any case, what is happening in Zululand may probably still remain a child's play when compared with the situation in Johannesburg. A taxi driver, Zack, refused taking me on a paid trip to the Highbrow area of Jo'burg when I arrived from Richards Bay after the exit of the Super Eagles from the World Cup.

I had initially decided to stay in Highbrow at the instance of my cousin, who resides in that part of the very massive city. Highbrow, it might interest one to know, is just a stone throw away from Ellis Park, one of the World Cup venues. In fact, the stadium played host to the Nigeria-Argentina Group B opener.

Zack, a Jo'burg resident, did not hide his perception of Highbrow. He told me point blank that the suburb is the headquarters of drug business run by Nigerians, even as he urged me as a tourist to avoid the place like a plaque if I would want to return home in one piece after the World Cup.

It is only a mad man that would have dismissed the wise counsel with a wave of the hand and hit the lions den (sorry drugs den). I quickly put a call across to some of my colleagues, who all along, had stayed back in Jo'burg covering the Eagles from a distance of over 700 kilometers. At the end of the day, I stayed in Randberg, another suburb that is not notorious for drug. Though I would have loved to see things for myself in Highbrow, just as I did in Richards Bay, I was too scared to embark on a 'second missionary' journey to a drug land.