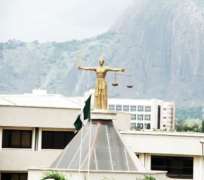 
ASABA, July 14, (THEWILL) - The Supreme Court has adjourned hearing in the suit between the sacked Speaker of the Delta State House Assembly, Hon. Martin Okonta and Mr. Kinglsey Philips to September 23, 2010 this year to commence hearing.

The adjournment, it was learnt is sequel to a complaint by Barrister Ikhide Ehighelua, counsel to Mr. Philips that his client has not been properly served the court processes.

Mr. Elighelua told the court that until today (July, 13, 2010) he was representing Mr. Philips saying that he was no longer representing him because Mr. Philips did not ask him to do so in respect of the case at the apex court.

He however admitted before the court that as the only known counsel to Mr. Philips, he was served the court processes wrongly.

The lead counsel to the Speaker, Chief Lateef Fagbemi SAN contended that all the parties including Mr. Philips and his counsel had been duly served and urged the court to continue with the substantive suit.

But Chairman of the five man panel justices, Justice Dahiru Musdapher ruled that Mr. Philips should be properly served and adjourned the case to the 23, September 2010.

Justice Musdapher remarked that all the motions pending and substantive appeal will be heard on the next adjourned date.

However the apex court did not grant Hon. Okonta stay of execution order.