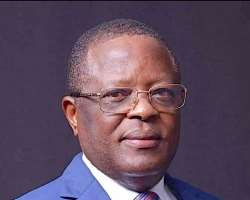 UMAHI'S DEFECTION
Recall that Governor David Nweze Umahi sometime last year defected from the opposition People's Democratic Party (PDP) to the ruling All Progressives Congress (APC) in a bid to pursue his Presidential Ambition and most importantly to cover his lootings from Ebonyi State Treasury.

A defection he solely embarked on without influencing any member of Ebonyi PDP National Assembly Members, Top Leaders of PDP in Ebonyi State & Business Moguls to defect alongside with him.

Even at the moment non amongst the Members of Ebonyi State House of Assembly defected at the floor of the House from the Opposition People's Democratic Party (PDP) to the ruling All Progressives Congress (APC).

DID GOVERNOR UMAHI CONSULT WITH LEADERS OF APC IN EBONYI STATE DURING AND AFTER HIS DEFECTION FROM PDP TO THE APC?

Governor Umahi in his usual bullying manner blatantly refused to consult with those who were in APC before his arrival.

He undermined Leaders of the APC in Ebonyi State claiming that he can always have his way with or without them considering the fact that he's a sitting Governor that is sitting very well. This singular action made many leaders of the party both within and outside Ebonyi State to distance themselves from Umahi's shenanigans. The main impediment that will frustrate Governor David Nweze Umahi Come 2023 from producing his successor is the the Ebonyi APC Court Case being pursued and secretly sponsored by highly placed Leaders of the Old APC in the state.

Recall that the Old/Foundation Members of Ebonyi APC approached a Federal High Court sitting in Abuja to seek redress over the unlawful dissolution of Ebonyi APC State Executives.

A source close to the Old/Foundation Ebonyi APC members who facilitated the filing of the suit disclosed that the suit is a dangerous one which will truncate all the hatchet plans of Governor David Umahi. In the suit, the following questions were raised by the Plaintiffs:

3. From the constructions of the 4th resolution made during 1st – 4th Defendants Emergency National Executive Committee meeting, contained in the five resolutions unanimously reached at the National Executive Committee meeting of the 1st – 4th Defendants, held at the Council Chamber, Presidential Villa, Abuja on 08/12/2020, whether the 7th – 9th Defendants are the persons reconstituted; composed and reinstrated to act as the excos of the 1st Defendant in Ebonyi State to serve in their respective offices in a Caretaker Committee Capacity.

Relief being sought by the Plaintiffs are as follows;

1. DECLARATION of this Honorable court that the purported dissolution of APC state working committee of Ebonyi State, by the National working committee of the party sometime in November 2020, without allowing the tenure of the elected members to elapse, is in Breach of section 17 (i) (ii) (iii) All progressives Congress Constitution 2014.

2. A DECLARATION that the purported constitution and recognition of a caretaker committee led by the 7th -9th defendants and others, made up of non members of the All Progressives Congress to take over the activities of elected members of Ebonyi State working committee is in Breach of Article 9 (i) of 1st defendant’s constitution, 2014 and the 4th defendant’s 4th resolution-decision of 8/12/2020.

4. A DECLARATION that the purported appointment and recognition of the 7th, 8th and 9th defendants and 12 others Caretaker Committee to assume office and take over the duties of the composed Caretaker Committee of the 1st defendant’s state working committee in Ebonyi state APC, is in breach of the 4th defendant’s 4th resolution-decision of 8/12/2020 and in contravention of Article 13.8 of APC Constitution, 2014 and therefore illegal, of no effect.

From Information made available to us, some Big Wigs of the Old APC members in Ebonyi State led a delegation to the Leaders of the Party at National Level to distance themselves from the purported endorsement of Ali Modu Sheriff by Governor David Nweze Umahi.

During the visit, the Old APC Leaders in Ebonyi State assured the party hierarchy of their readiness to support whosoever the party chooses as its National Chairman, describing Umahi's endorsement of Sheriff as a mischievous one.

Recall that Governor Umahi during the Anambra Guber Primaries endorsed Chief George Mogharu as his preferred choice of candidate not minding that the interest of the party hierarchy was on Senator Andy Uba.

In our next edition, we shall disclose to you the possibility of a Paralleled APC EXCO in Ebonyi State and its subsequent recognition by both Court and National Leadership of APC.