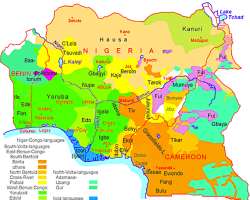 With names such as Valentine, Augustus, Pinocchio, Rose, we are actively killing our cultural heritage. Although for a very long time our people have being walking away from the race that they know and should understand, to embrace what they know not, this contrasting dilemma was waht the western world outrightly term a civilising mission when they came back then, so many years ago, in the robes of colonisation. How we have continued in this same vein, I still wonder in my pondering.

From all angle, the Yoruba culture seems in danger, the Igbo race seems in troubles and a bit after bit the hausa race is losing its identity. Not by an external force, but within, and like the Yoruba will say, "If the death within cant harm you, the external forces are powerless" and this continues our sorry story of a people losing its existencial stories into scornful abyss.

Nowadays, the common trend is, parents particularly, they just want to see their kids speak English, so fluently that the mother tongue is now a taboo. Meanwhile, the child at the ages of 1-10 has the abilities to learn atleast 3-languages simultaneously, but today's mother's and Fathers prefer such a child understand and communicate very fluently in the foreing man's language even at the peril of theirs. This barbaric act seems like a learning process to our parents, this unconsciously made our own language secondary. So secondary that even in the names we bear and give our children, so when you see the manner I started, I crave for the meaning of the names above, when originally we could have names with the meaning of our clans, Remilekun, Ebube, Okonkwo, Itunumi, and many other indigenous names, like Oshungbure, Ojukwu, without the giult of what your peers will feel hearing such strange names, STRANGE, I call it, for this is what copying blindly the white man's history has caused us.

When we walk through the terrain of religion, to understand my point, one has to be an open-minded individual, not washed away in the flow of religious bigotry or extremism. Till date, I still wonder who made our own gods seems diabolical to us, while we bought the white man's religion with our right hand, we secretly keep our gods on the left, on the days when the white god have gone to sleep. This is evident in many issues today, rhey will say seek for spiritual light ti this issues especially if it relates to health and death matters.

There are no troubles when a man decides to choose any religion of his choice, that is freedom of association, however morally, it is very abnormal when custodians of a particular race now biuld strange temples in the shrine of their forefathers, in the name of civilization. How do you eat your cake, have it and still want to keep it, isn't this simply out of normality. A man can be a worshipper of any religion but not a king, as we see nowadays. It is a shame to have seen kings of many of my tribesmen, post even on social media their new-found faith, and I do not understand the message they are passing across, but onething is for sure, we have simply lost touch of history and the right process of what we stand for in the circle of life.

However, this is open to constructive argument, but the danger here is, we are continuosly losing tracks of where we are coming from, and fastly erasing the roads that leads home, oneday we might wake up and realise we are a people with no history as the western world had once called us, in the name of civilization.

The education curriculum is another angle to look at things from, before you can gain admission into tertiary institutions with great historical backgrounds, such as OAU (ife), University of Nigeria (Nsukka) Uthman Danfodio (UDUS) one of the key subject you must have is English language, while depending on your course of study the other subjects are at your mercy, including our cultural heritage, while the justification for this is quite understandable, the rendering of our languages irrelevant are not sensible, on all parameters used.

How we have come here is really the problems of so many things put together, however the bulk lies on parental upbringing, for there is little the child can do, when the parent insist he/she speaks a certain foreing language, and make their own language that of dullards. Infact we have gone as far as making our tongue a taboo in the class.

Some religious sect prefer ti fight for the full inclusion of their creed in the curriculum rather than fight for the compulsion of your language in all core subjects offered across board, from primary to tertiary, because this is one of the ways to safe a race fast washing away.

While we are continuously buring our own cultures, the western world we seem ti be emulating, continues to outpace us in wits and boundaries, today we now have different embassies in foreign lands having Yoruba, Igbo and Hausa interpreters for people coming from such countries as ours, do you know the reason for such? There is no hiding place for us anywhere.

If colonialism didn't rob countries like Indian, and civilization didnt ron the second largest and fast growing economy like China of its cultural whims who then is telling us that without English we can progress?

Ironically, even the English we are struggling to know is not something we are good at, base on fact and observations as a teacher, more than 80% of the students I have come across cannot even construct a proper sentence without hiccups. So of what use is the trouble, atleast if you don't know where you are going, you should know where you are coming from.

The urgency of now is saving our race before it gets hammered out of time, for this not to happen, the family as the smallest unit in the society has the largest of the task. Parents now need to start teaching their children about their tribe and their race, our conversation with ou r children should be 80% our languages and 20% foreign. The age of tales by moonlight and the deeds of past legends of their clans should be encouraged either in written literature or spoken words.

Names with meaning should start dominating both the first, and last names of their children and the need to feel proud about it should be inculcated in them right from childhood.

Government on the other hand must, through education, make it compulsory for students to have their indigenous language part of the subjects that must be passed in other o gain admission into tertiary institutions. And students as well should atleast have history as one of the subjects they are encouraged to take.

Lastly, as individuals, while growing up, the social media age is engulfed with a lot of things not regulated, even history, and research as well, while some of us have crossed the age of writing exams again, we are never graduates from in the school of life, how much more our norms and values, we can make more research about our past, this way we can give direction to our future.