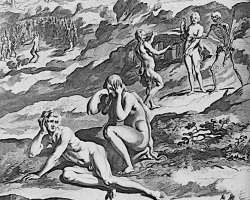 My mind is made up and I am going down.
Celestiality has lost its charm. The dazzling light from the majestic throne, once so comforting, now repels me. I think I will go mad if I hear one more note from the rendition of the choir of cherubs and seraphs. The vast space of the heavenly court, once so encompassing, now looks like a prison. I must get away fast before I burst with these strange but savagely sweet feelings.

And truly they are strange. All the while I took my place in the celestial legions, flapping my star-studded wings and strutting as one of the divine sons such feelings were unknown to me. The thought never flashed across my consciousness even on the occasions I stopped by Archangel Gabriel’s palatial quarters for a chat. Although he is one of the seven archangels and favoured by Our Father for delivering universe-shaking messages, Gabriel is a kind, approachable sort. Small wonder almost all of us, including those who came into being eons later, really get along with him. Of course, we all respect him, but younger sons of God like me look up to him as a good-hearted big brother. The same cannot be said for Michael: he always looks forbidding and dazzlingly martial in his heavenly armour. Most of my mates and I wisely keep out of his way and those of his hand-picked warriors.

Sorry, I deviate. This feeling first burst my bubble (what a terrestrial phrase) the day Lucien showed up in my quarters ostensibly to check my trumpet. Lucien and I were great pals, about the same eon, and junior but highly competent members of the brass instrumentalists group of the sixth order of musicians among the divine sons.

‘Seen those beautiful earthlings?’ he asked softly, putting aside my gleaming trumpet.

I shrugged. Earthlings had no special fascination for me. Like all celestial beings I was familiar with Earth and the Garden of Eden and what transpired there but I was rather too low in the hierarchy to get myself unduly concerned with its affairs.

To cut a long story short Lucien educated me about the charms of the daughters of men. He came to my place with a small telescope that gave him unhindered visual access to every spot on earth.

‘Where did you get it?’ I asked rather enviously.

‘Promise you won’t tell,’ he said reluctantly. I nodded vigorously, subduing a crazy thought that he probably filched it from the legionary barracks. If Michael found out the punishment would be awful.

‘Lucifer gave it to me.’
I blanched. That super-beautiful, light-bringer who led the choir in the good old days, well before Father created my generation. Gabriel told us stories of how our Father and his only-begotten Son used to dance once Lucifer took the stage. But he got too ambitious and Michael was called in to sort things out. From what I learnt Lucifer still bore our Father a king-sized grudge and was manifesting it down on earth.

Lucien used the telescope to show me astonishingly luscious earth-women of all shades and in different climes and circumstances. I saw them naked, having their baths, dressing up, burping babies. But what set me on fire were the gyrations they were engaging in with earth-men. It was simply perverted paradise; a unifying factor. The moans of the women, the groans of the men, the various styles of gyration, started something sweetly savage in my head.

Lucien looked into my eyes and saw I was blazing.
‘We can have it.’
‘But we are not mortal. Mortal pleasures are forbidden us.’

‘Says who?’ Before I could open my mouth he went on relentlessly.

‘Do not be fooled. Our Father simply wants to deprive us of freedom. You have the right to quench the fire in you.’

‘You follow Lucifer,’ I said quietly, fear and admiration tag-teaming in my head. Generations of angels had been schooled about the war in heaven and how Michael ended the rebellion. None of the heavenly beings had stepped out of line though the border-line between us and the fallen angels wasn’t so clear-cut. Sounds of their wild parties in the outer darkness reached us and our Father and Lucifer had meetings at the border. Calling them meetings may give a wrong impression; there was no reconciliation between them, and Lucifer, now called Satan, for all his pride, was fully aware of what our Father was capable of. But these occasional meetings were contests for supremacy over the earth and its inhabitants.

Lucien simply smiled. He left shortly, leaving me with the telescope. I did not return it to him or report him. Truth was, I was hooked on the ‘scope and could spin round the whole earth, taking in sights and sounds of luscious women opening their legs to men. On my own I pondered and wondered why I should be deprived of this savagely sweet thing.

It shocked me when Gabriel and Uriel came to my quarters not long after Lucien’s visit. Though they were my big brothers among the heavenly hosts, they were not frequent visitors to my place.

After pleasantries Gabriel came to the point.
‘Micron, will you listen to counsel?’
My heart skipped a beat. I knew at once I was in trouble for listening to Lucien.

‘Yes.’ My voice was small.
The two archangels looked at me gently. They spoke mildly but the message was clear.

‘Our Father knows Lucifer’s antics, and how determined he is to stain your generation of heavenly beings. Hence this apple of sexual impurity.’ Gabriel’s wings flapped to emphasize his words.

‘We must follow Father’s will. Heavenly beings do not copulate.’

‘But I have this….’ My vision suddenly filled with an astonishingly beautiful naked woman clinging to a nude form that impaled her remorselessly.

Uriel’s voice cleared my head. ‘Micron, please do not listen to Lucifer. The consequences are unimaginable; to be cut off from God’s presence.’

‘Am I not created in my Father’s image?’ That seemed to me a justification for indulging.

‘Our Father creates for His purpose which is even beyond our comprehension. The delights of the earth are not for us.’

‘Why?’
Gabriel and Uriel looked at each other, smiled indulgently. Gabriel answered more authoritatively.

‘It is His will, young friend. Our Father is aware of the revolt being planned. You can exercise the free will He has given you, and reap the permanent results. But you know how much He loves you.’

Ariel and Tinas, two of my comrades present, jumped up.

‘No, we will follow our Father’s will,’ they declared and flew out. At once the wild sounds died and a dazzling but peaceful light filled my home. Father was making His presence felt. We all bowed.

‘Choose life, my sons. Satan’s pleasure is no treasure.’

Lucien was not present at this gathering. Our paths crossed after a wing-attachment class. He tried chatting me up but I avoided him like a contagious disease. He relentlessly pursued me and finally succeeded.

‘Come on, Micron; remember your desire to be free. Lucifer was impressed with your questions when Gabriel and Uriel visited. These guys don’t have answers; he does.’

‘Sure he does. And his answers have turned the earth upside down.’

Lucien shrugged. ‘Blame God; He ties his creation on a tight rope. Once out of line, He unleashes mayhem.’

Although I knew he was talking crap I was impressed. Lucien had a way with words. And truth be told: Gabriel and Uriel had left me with more questions than answers.

As we flew home Lucien talked me into following him to the Valley of Pleasure situated just before the border-line. This was where God and Satan contested for Job. Ever since Job proved his loyalty our Father allowed us go there. With a caveat. ‘Whatever you decide will determine your fate at the End of Time.’

It was a test of tests. I burned. Unlike the telescopic sights the women here were full-bloodedly real and accessible, reaching out to me. What stopped me from embracing anyone of them was that Lucien did not touch anyone of them, either. I turned and fled, closely followed by Lucien.

‘Why didn’t you embrace any of them?’ I asked him.

Lucien did not reply but I saw the answer in his eyes: his mission was to ensnare other sons of heaven before coming out. I was chagrined.

Yet what was so special that our Father was depriving us of this luscious fruit? The question bothered me so much I decided to ask Him.

‘My son, my will is enough for you.’
No, it is not, I decided. His dazzling love spread out towards me but I refused to be enfolded. I turned and sultry female moans filled my head as I departed from His presence.

Henry Chukwuemeka Onyema is a Nigerian historian and the author of the novella ‘In Love and In War.’ Email: [email protected] .