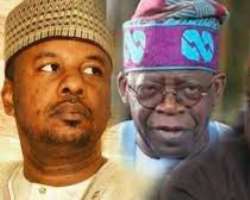 Salihu Tanko Yakasai, a former Special Adviser on Media to Kano State Governor, Abdullahi Ganduje, has criticised Governor Dave Umahi of Ebonyi State over his posture that the ruling All Progressives Congress will zone the 2023 Presidency to the South-East geopolitical zone of the country.

Yakasai said Umahi would be missing it if his reason for decamping from the Peoples Democratic Party to the APC in November 2020 was for the ruling party to zone the 2023 presidential ticket to the South-East.

According to Yakasai, the potential presidential candidate of the APC is in the South-West and not in the South-East, a zone he claimed does not have the political number and candidate with national appeal and weight to pull votes across the country in the forthcoming elections.

The former aide of Ganduje stated this on Friday as a guest on Arise TV's 'The Morning Show' breakfast programme monitored by The PUNCH.

Yakasai, who is an APC member, had been sacked earlier in 2021 for criticising the President, Major General Muhammadu Buhari (retd.) over his inability to secure the country. His criticism had also landed him in the net of the Department of State Services.

The PUNCH had reported that Umahi, who is the Chairman of the South-East Governors' Forum, had defected from the PDP to the APC in November 2020 over alleged “injustice” to the people of the zone.

“I offered this movement (defection) as a protest to injustice being done to South-East by the PDP. Since 1999, the South-East have supported the PDP. At a time the five states were all PDP. One of the founding members of the PDP was from South-East, the late former Vice President, Alex Ekwueme.

“It is absurd that since 1999 going to 2023, the South-East will never be considered to run for presidency under the PDP. And this is my position and will continue to be my position,” Umahi had stated at his defection.

He had also said that “there are a lot of qualified persons from South-East” for the number one office.

However, speaking on the television programme on Friday, the son of the founding member of Arewa Consultative Forum and elder statesman, Alhaji Tanko Yakasai, said APC potential candidate is in the South-West and not in the South-East.

Yakasai listed the APC chieftains, who have the ability to win the next presidential election, as APC National Leader, Bola Tinubu; Vice-President Yemi Osinbajo; as well as Ekiti State Governor, Kayode Fayemi.

He said, “Umahi should tell us if APC has promised him and other governors from his region if they are going to give power to them in 2023.

“That is a question that should be put to him (Umahi) because as far as I am concerned, I have not seen any indicator that APC is going to field any candidate from the South-East, to be frank, and candid.”

“I do not have one preferred candidate from the South-West but there are some people that have the potential. There is a difference between indicating interest and then the ability to win the general election. You have to have someone that is a bridge-builder, you have to have someone that across the region can galvanise support, can galvanise votes and who is being seen as a nationalist, all these are indicators of who can win an election in 2023.

“There are a number of them. We have Asiwaju Bola Ahmed Tinubu; we have the Vice-President, Prof Yemi Osinbajo; and to some extent, Governor of Ekiti that is being put out there as a potential candidate. All these people are potential candidates that the party can go for; anyone of them,” the APC member stated.

Continuing, Yakasai said the flagbearer of the APC should come from the South-West in 2023 because the zone “immensely” supported the formation of the ruling party and was the “biggest contributor” to the victory of the party and the emergence of Buhari in the 2015 polls.

He said, “In the APC, power should rotate to the South and even in the South, I'm of the opinion that the candidate of the APC should come from the South-West in particular and I have my reason for saying that.

“And as such, even if you look at the major contenders in the APC, they are majorly from the South-West region of the country. I see no reason why the rest of the party should not put its weight behind a candidate of their choice for the general elections.”

'It's injustice for northerner to succeed Buhari'
Yakasai, however, said that the Southern Governors' Forum has heated the polity by making a proclamation twice demanding that power should shift to the South while they should begin “behind-the-scene diplomacy”.

“As far as I am concerned, there has been no major shift towards the APC retaining power in the north apart from one governor that had indicated interest and backroom gossips but majorly there hadn't been any indication in the APC that power is going to be retained in the north.

“That is why I faulted the Southern Governors' Forum by going public twice; they should have reached out to their political parties…to have some bargain and diplomacy to ensure that the candidate emerges from the South,” he explained.

“You cannot have APC being in power for eight years with a northern president and then another (northerner) comes into power and continues. This is injustice,” he stated. (Saturday PUNCH)