PDP: Gov Ugwuanyi-led committee says it has no mandate to zone presidency, other political offices 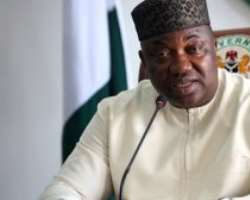 The Zoning Committee of the Peoples Democratic Party (PDP) led Governor Ifeanyi Ugwuanyi of Enugu has said it has no mandate to zone political offices such President or Vice President of Nigeria.

Ugwuanyi, who is the Chairman of the Committee, spoke in his address at the maiden edition of their meeting at the Government House, Enugu on Thursday.

PDP set up for the zoning of national offices of the PDP ahead of its national convention set to hold on October 30 and 31.

There are apprehensions among politically perceptible Nigerians that PDP may go for Northern presidential candidate for 2023 elect ns as seeks to wrestle power from the ruling All Progressives Congress.

APC has been indicating that it’s presidential candidate would come from the south after President Muhammadu Buhari, a Northern Muslim, concludes his tenure in 2023.

“Our committee is strictly limited to the PDP National Executive Offices to be contested at the 2021 PDP National Convention scheduled for the end of October, 2021,” Governor Ugwuanyi said, adding: “We have no mandate to zone political offices such as President or Vice President of the Federal Republic of Nigeria”, Ugwuanyi said.

According to the governor the PDP remains the most credible platform to deliver good and accountable governance to Nigeria.

The work of the committee, he said, will contribute immensely “in this deliberate search for National Officers of our Party that will help the PDP achieve the lofty ideals and goals of our founding fathers”.

He, therefore, enjoined members of the committee to be frank, open, and constructive in their proposals and debates, and exhibit consistency with the enormity of their mandate.

“The membership and leadership of this committee have been carefully selected as it is composed of very experienced, competent and eminent Nigerians who are desirous of repositioning the PDP to play its role not just as the main opposition political party in Nigeria but to build a party that offers alternative policy proposals and hope to Nigerians that there is still light at the end of the tunnel”, the Governor said.

After what he described as a “fruitful meeting”, it was then adjourned to next week.

Members of the committee present at the meeting include the Governor of Benue State, Dr. Samuel Ortom who is the Deputy Chairman, the Deputy Governor of Zamfara State, Barr. Mahdi Aliyu Mohammed, who serves as Secretary, former Presidents of the Senate, Senator Iyorchia Ayu and Senator Anyim Pius Anyim.