Diaspora’s Life Reduces One To Some Form Of Garbage 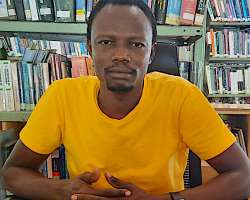 Farah uses the sea trope as a perfect strategy to demonstrate that indeed Somalis are nothing but rubbish in the face of diaspora. Barni, one of Farah’s protagonists, narrates the death of nine Somalis who perish due to an occurrence of a shipwreck. Barni further says that a number of boats never care while transporting Somali Immigrants, they overcrowd them. This congestion culminates into a lot of garbage spilling into the Mediterranean Sea. The rubbish that is eventually seen in this sea is among others the tomatoes’ cans and the lifeless Somali-bodies. This sea metaphor portrays that the journey of Somalis into Italy is a matter of survival but not as in the law of the jungle, here anybody dies or survives the sea crossing. Many of such Somali bodies or debris are not collected and assembled for interment; it is by chance that bodies are buried such as the shipwreck- nine.

Consequently, those that endure the terrifying sea peregrination have a barrier of unwelcome and rejection in Italy. One has to immediately encounter a Psychological return to a war-torn Somalia after realizing that they have no place in Rome to call home. Farah also portrays immigrant Somalis as a lot that cannot identify themselves with Somalia as their home and therefore the struggle to reinvent their interstitial selves. For instance, Luul ,an expectant- Somali woman in Italy, has no place to call home, neither a structure to refer to as a house ,she ends up living in an old-wretched car in a place only occupied by men(the only woman living among men). Luul has no choice but to survive and deliver her baby while in this despicable vehicle. Taageere on the other hand, describes himself as a hobo. Truly, Taageere has no house in America; he keeps on surviving and sleeping sometimes in drinking dens, sometimes in an acquaintance’s house who at dawn asks him to leave without much ado.

Besides, Farah paints the plights of Somali immigrants labeled as terrorists. In an occurrence dimmed as threat, Somalis are immediately dimmed as the engineers of such ominous and regrettable event. Through Maxamed X-the mute, Farah manages to demonstrate that Somalis are assumed or mistaken to be terrorists. Maxamed X is arrested, maimed and tortured by Italian police after he is found around the burning derelict car. They care not since is a mute and can’t speak, they go ahead to arrest him as a suspect of terror yet he was trying to rescue a woman and her baby from the dilapidated car under flames. Maxamed X thought Luul and her baby had been trapped in the rundown vehicle on ablaze.

Moreover, Farah‘s book depicts the Somali immigrants as hopeless and a people that find no meaning in life. Taageere confesses to his repudiated wife that he is a man of sadness who goes around in American city dirty and unkempt, speaking to no one and that he sleeps wherever he happens to be. Taageere furthers that he is so dirty and hair covered that even his own mother won’t recognize him.

Domenica Axad affirms this hopelessness “the usual life of diaspora, aimless peregrination. I searched within myself trying to find the roots of my existence ………my life has always lacked order……….and I was falling apart in Rome in this delirious state.”

By and large, Farah brings out images of Somali that live in resentment. They have no choice but to embrace resentment, this is because they don’t understand why they are otherized and treated with hate, seclusion and rejection by their host countries. They feel like they are not wanted; they can never belong and that they can never qualify to be identified with the hosts. Farah highlights regret by the fact that Italians as half Africans yet they mistreat the Somalis with a lot of indignation.

Indeed, Farah succeeds in demonstrating that diaspora reduces one to garbage. She enunciates the plights of Somali emigrants as the hopeless lot that portends sanguine of a place to call home. Farah depicts the dreams of Somali immigrants that one time they will wake and embark on the journey back to a stabilized Somalia; be it political, economic and sundry stability but above all peace ,tranquility and calmness in a country that was declared a republic in 1960.

Farah undeniably reminds the world that if it were not of the civil war that broke out in 1991 culminating into people’s displacement, Somalis could not be living in disjuncture in a story of paths chasing paths and with so many wounds born from life without a natal home. Farah says Somalis identity is now so uncertain and worries that since Somalia is a land in diaspora, the Somali language is likely to die as Axad confirms for having forgotten the Somali language steadily.