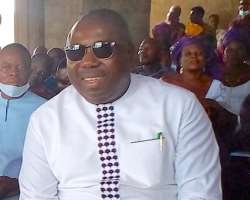 A frontline Ebonyi 2023 gubernatorial aspirant and Chairman of House of Representatives Committee on Reformatory Institutions, Hon. Anayo Edwin-Nwonu has said that all that Nigeria needed was fit and credible leaders. Youthful Edwin-Nwonu said this in Enugu while responding to journalists who sought his reactions on the call of the former Nigerian military President, Rtd. Gen. Ibrahim Badamasi Babangida, for a president that is not above 60 years in 2023.

"Nigeria is really in distress and all that Nigeria needs in 2023 is a credible leader who is intellectually and physically fit and has sufficient interest in reviving and returning the country to the path of progress". Citing the example of two American presidents, Hon. Edwin-Nwonu said, "Recall that Barack Obama became the president of America below the age of sixty while Donald Trump ascended the American presidency way beyond seventy years. Their respective performances in office go a long way to show that age is not too important in leadership. There are also many African leaders on both sides of sixty who wrote their names in gold".

The federal legislator who represents Ezza North/Ishielu federal constituency in the National Assembly strongly feels that "the present condition of the country is so critical that it demands that the 2023 general election must be approached dispassionately by all and sundry if we want to avoid the mistakes of the past".