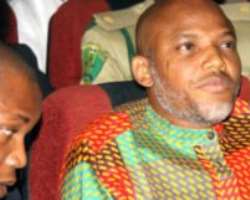 The Indigenous People of Biafra (IPOB) has expressed worry over the recent attack at the headquarters of the Nigeria Defence Academy (NDA) by bandits, warning that nothing should happen to its leader, Nnamdi Kanu, who is being detained by the Department of State Services(DSS).

IPOB in a statement by its spokesman, Emma Powerful, noted that if the NDA office could be attacked, then where Kanu is presently detain could also pose a serious threat for attack. He reiterated that if their leader should die while in custody, the country will seize to know peace. 'This attack at the NDA is also an indication that they may be planning to attack the headquarters of the Department of State Services (DSS) where our leader Mazi Nnamdi Kanu is currently detained,' he stated. 'If Fulani bandits with the aid of compromised Fulani controlled Military can successfully attack the NDA and kill Igbo military officer, why will one think it's impossible for Fulani bandits to attack DSS headquarters and kill Nnamdi Kanu.

‘The Fulani controlled Federal Government knows that our leader is their greatest headache. He predicted what is happening now and how the cabal running the country wants to actualise the Fulanisation and Islamisation agenda. 'Many people didn't believe him but the unfolding events leaves no one in doubt of the reality of this wicked agenda.

Anything they can do to eliminate our leader will not be considered too expensive but our God will frustrate their evil plot. 'We, therefore, want to place Nigeria on notice that nothing should happen to our leader while in her custody. Should anything untoward happen to our leader Mazi Nnamdi Kanu while in custody, Nigeria will regret the day it was amalgamated. 'We equally want to place the world on notice that Nigeria should be held responsible if anything befalls our leader.

Biafrans are also placed on red alert about the disturbing security situation in Nigeria and the possibility of attack,' Powerful warned. The group’s media scribe has also alleged that the attack on NDA with heavy security is an indication that there could be a secret agenda to turn Nigeria into Afghanistan. 'We wish to put the world on notice of the wicked plot by Nigeria Government and its security agencies to turn Nigeria into another Afghanistan. 'Tuesday's coordinated attack on the heavily guarded Nigeria Defense Academy, NDA Kaduna by rag-tag Fulani bandits with ease and without resistance was just a confirmation of the age-old plan to accomplish this wicked agenda,' Powerful alleged. (Daily Sun)