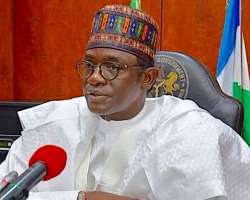 An aggrieved APC member, Okosisi Emeka Ngwu has approached an Abuja High Court to sack the Mai Mala Buni-led Caretaker/Extraordinary National Convention Planning Committee (CECPC) of the ruling All Progressives Congress (APC) and nullify all the actions taken by the committee so far, including the recent ward congresses held last Saturday across the country.

The suit marked: FCT/HC/CV/1824/2021, was filed by one Okosisi Emeka Ngwu, who said he is an aggrieved member of the APC.

Buni is the Governor of Yobe State but doubles as APC Caretaker Chairman, a development which is at the heart of the current crisis in the party.

In asking the court to stop Buni and other members of the Caretaker Committee from continuing to run the party’s affairs, the Plaintiff Ngwu argued that CECPC headed by the Yobe Governor was not recognised in the APC constitution and therefore is illegal.

The Plaintiff raised four questions for the court to determine, including whether the CECPC was created by the constitution of the party, and whether, in line with Section 87(4) (b) (1) of the Electoral Act (as amended) any other party organ apart from the National Executive Committee (NEC) can validly set a date for a congress for the purpose of nominating the governorship candidate of the political party.

The Plaintiff also asked the court to determine whether a valid candidate or officer of the party can emerge from a congress fixed by any other organ apart from the NEC.

Among the prayers sought in the suit, the Plaintiff particularly wants the court to dissolve the CECPC and declare that going by the provisions of Section 87(4)(b)(1) of the Electoral Act (as amended), only the NEC of a political party can validly fix a date for primaries for the nomination of the gubernatorial or other candidates of a political party.

Ngwu equally asked the court to declare that unless an election is conducted in accordance with the Electoral Act and by an organ known to and created by the constitution of the APC, no valid candidate can emerge from such a primary.

The court was also asked to grant an order setting aside all actions and decisions so far taken by the Buni-led CECPC.

In a supporting affidavit, Ngwu claimed that he wanted to contest for the position of APC National Chairman in 2018 but decided to wait until then incumbent Adams Oshiomhole completed his tenure in four years.

According to him, two years down the line, in 2020, he was surprised to hear that the National Executive Committee (NEC) and National Working Committee (NWC) had been dissolved and “a contraption known as Caretaker/Extraordinary Convention Planning Committee (CECPC) had been created by an unknown person and Mai Mala Buni asked unilaterally to head the committee.”

The Plaintiff added, “I was surprised as by the constitution of the party, the National Executive Committee (NEC) would be in office for four years until June 22, 2022.

A date is yet to be fixed to hear the suit as the courts are currently on vacation.

The court case is the latest twist in the unfolding crisis which hit the ruling party after the Supreme Court faulted Buni’s dual role as state Governor and caretaker chairman of a political party.

The Supreme Court made the pronouncement on July 28 while delivering judgment in the petition filed by Peoples Democratic Party (PDP) candidate Eyitayo Jegede against the election of Ondo State Governor Rotimi Akeredolu of the APC.

Although the Supreme Court declared Akeredolu winner of the election and dismissed Jegede’s petition, some justices on the panel of the apex court pronounced that the composition of the leadership of the APC was not in compliance with the provisions of Section 183 of the 1999 Constitution of the Federal Republic of Nigeria (as amended).

Section 183 of the 1999 Constitution stated: “The Governor shall not, during the period when he holds office, hold any other executive office or paid employment in any capacity whatsoever.”

The pronouncement of the Supreme Court justices on Buni’s leadership divided major stakeholders in the APC in the build-up to the party’s ward congress that was scheduled to hold across the country on July 31.

There were fears that the apex court pronouncement, which suggested that the Buni-led committee was not constitutional and as such cannot organise valid congresses, signalled judicial problems that could cost the APC in future elections.

Minister of Labour and Employment, Festus Keyamo advised that the party should suspend the July 31 ward congress, arguing that the Supreme Court had invalidated Buni’s chairmanship.

Keyamo, a Senior Advocate of Nigeria (SAN), warned that the congress could be annulled in future because of the pronouncement by the Supreme Court justices.

The ward congresses however proceeded as scheduled on July 31 despite reported efforts by Vice President Yemi Osinbajo and some other party stakeholders to have the exercise suspended.

Buni, and the Attorney General of the Federation (AGF) and Minister of Justice Abubakar Malami reportedly spearheaded the push to go ahead with the congress.

Besides Buni, other governors whose membership of the Caretaker/Extraordinary National Convention Planning Committee (CECPC) has become a thorny issue for the APC in the wake of the pronouncement of the Supreme Court justices are Niger State governor Sani Bello, representing the North-Central, and Osun State governor Isiaka Oyetola, who represents the South-West.