In 2003, South-east Voted For Obasanjo Against Ojukwu – Why? 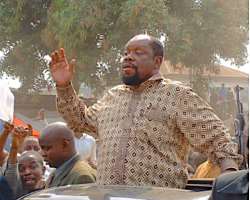 The politics of the Igbo has not always been suffused with emotions and native prejudices. A good case is the pragmatic entente Nnamdi Azikiwe’s NCNC forged with Ahmadu Bello’s NPC in the 60s – despite the two parties’ diagonal differences. While Bello’s NPC was ultra-conservative, Azikiwe’s NCNC had a liberal character.

Also, in 1979 the south-east worked with the north to see the emergence of Alex Ekwueme as Nigeria’s first vice-president under a presidential system of government -- and with Shehu Shagari as president -- less than 10 years after the Nigeria-Biafra civil war. In fact, while Ekwueme was a member of the National Peoples Party (NPP), Shagari was a member of the National Party of Nigeria (NPN). But this did not stop the entente cordiale.

Although the NPP/NPN alliance later became fractious in 1981, the emergence of an Igbo citizen as vice-president a few years after the war blurred the blot of the Igbo being a conquered people. It was under this arrangement that Odumegwu Ojukwu was allowed to return to Nigeria from exile in Ivory Coast in June 1982. And a year after his return (in 1983) he ran for senatorial office – but lost.

The south-east was heuristic in these instances, and played realpolitik. But what happened afterwards?

In the 2003 presidential election in which Ojukwu, the famed Igbo leader, vied, the south-east voted tremendously for his rival – Olusegun Obasanjo of the Peoples Democratic Party (PDP). In fact, Ojukwu’s ‘’Igbo party’’, the All Progressives Grand Alliance (APGA) could not even win governorship elections in the south-east except in Anambra -- the late politician's native home.

Obasanjo trounced Ojukwu on his own turf. Why? The election was not so much about Ojukwu, but about the centring of the south-east. The Igbo elite consorted with the PDP which at the time had a national appeal, and they were able to pivot the south-east in the nucleus of national politics.

But the south-east’s liaison with the PDP over the years has not yielded commensurate dividends in terms of economic and infrastructural developments for the region. The beneficiaries of the PDP years were the elite who had sizeable representations in government.

The south-east regaining its place means it must look beyond a solitary party. It must put itself in the thick of things. And to sit at the table, it should discard isolationist politics and work with Nigerians across regions and parties – as it did in the past. It must forge new alliances – a political and social concordat.

OJUKWU’S VICTORY IN DEFEAT
Although Ojukwu lost the election, his participation in the exercise was of consequence. His participation showed manifest belief in Nigeria. A non-believer in a united Nigeria will not seek to be the country’s president. So, the involvement of Ojukwu, being a former separatist leader, in the election exemplified a reformed mindset committed to building a Nigeria where justice and equity reigns.

In a 2017 broadcast, President Buhari revealed his conversation with the late Ojukwu on Nigeria.

He said: “In 2003 after I joined partisan politics, the late Chief Emeka Ojukwu came and stayed as my guest in my hometown Daura. Over two days we discussed in great depth till late into the night and analysed the problems of Nigeria. We both came to the conclusion that the country must remain one and united.”

Whatever change we seek is in the ballot and not in the barrel of a gun. Ojukwu’s victory is the personal example he showed by participating in elections and chaperoning a political party -- APGA -- long after the war. He buried the hatchet and looked to a new future in a united Nigeria. The party stands to date. We should emulate him.