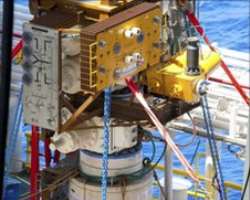 However, many thousands of barrels of oil will now flow freely until the new cap is fitted, an operation that could take four to seven days.

BP also said there was no guarantee of success at such a depth.

A fleet of 400 skimmers is in place to try to minimise the effects of increased oil loss.

The company has two other operations ongoing. One will deploy a larger surface vessel to collect oil, the other is drilling two wells to intercept the leak, which it is hoped will provide a permanent solution.

The larger ship, Helix Producer, could be in place to collect leaking oil as early as Sunday.

BP says the first of the relief wells will be finished in the first half of August.

The explosion of the Deepwater Horizon rig in April killed 11 people. President Barack Obama has called the leak the biggest environmental disaster in US history.

Increased potential
BP's submersible robots removed the current containment cap from the ocean floor at 1737GMT on Saturday but it will be several days at best before the new cap is in place.

A fleet of 400 skimmers is in place to try to minimise the effects of increased oil loss during the operation, BP said.

“It's not just going to be, you put the cap on, it's done. It's not like putting a cap on a tube of toothpaste,” Coast Guard spokesman Capt James McPherson warned.

The new sealing cap – similar to a smaller version of the damaged blow-out preventer – has three devices that are designed to shut the flow.

According to BP, the new cap “creates the potential to increase oil and gas containment capacity to greater than 50,000 barrels per day and should improve containment efficiency during hurricane season by allowing shorter disconnect and reconnect times”.

The company said that “there can be no assurance that the sealing cap will be successfully installed or installed within the anticipated timeframe”, given it has never been attempted at this depth before.

Experts say that the new cap will have to withstand enormous pressure. If the pressure becomes too great, another part of the well could rupture.

BP said that contingency caps were at the ready on the seabed should the replacement operation fail.

The Helix Producer is being brought in place and could be operational on Sunday. It has more than double the Q4000′s capacity to capture leaking oil.

The containment dome currently collects about half the amount of oil gushing out of the damaged well.

On Friday, the Coast Guard commander overseeing the response, Adm Thad Allen, said the flow of leaking oil could be contained by Monday. But in that time hundreds of thousands of barrels of oil could flow unabated into the ocean.

“We have a significant chance to dramatically reduce the oil that's being released into the environment and maybe shut the well in altogether in the next week,” he said.

Current US government estimates of the spill range from between 35,000 to 60,000 barrels a day.

On Thursday BP said its operation to drill a new relief well to stop the Deepwater Horizon leak was ahead of schedule.

BP's bill so far has been more than $3.1bn – and it has agreed to set up a $20bn fund to deal with compensation claims and clean-up costs.