Azikiwe, Ojukwu, Aguiyi-ironsi Gave Us One Nigeria: Igbos Should Stop Blaming Others For Their Woes 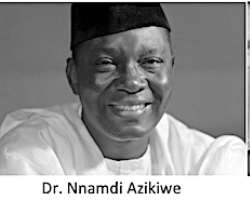 Nnamdi Azikiwe, Odumegwu Ojukwu and Aguiyi Ironsi gave us the ‘One Nigeria’, which Igbos claim is suffocating them today, therefore, the misplaced aggression towards Obafemi Awolowo, Ahmadu Bello, Tafawa Balewa, Ibrahim Babangida and Muhammadu Buhari for their perceived woes should first be directed at their kinsmen. It is therefore foolishness to pour invectives on Northern and Western leaders when the Igbo leaders of the pre-independence days, fought tooth and nail for the ‘Oneness’ of Nigeria.

This is the third time in my career as a writer, columnist and investigative journalist, that I will be using the term fools. The first time was in December 14th 2014 when some Igbo foolish politicians at that time were gloating over Jonathan for a Niger Bridge to be built by Public-Private Partnerships. I wrote a piece titled ‘Fraudulent Construction of Second Niger Bridge; Another 419 on the Igbo Nation’, and followed it up with another tilted ‘Auctioning of 419 Second Niger Bridge and Jubilation of Igbo Fools’ where I stated that:

“Lots of Igbo fools, including many top politicians, traditional rulers and other misguided elements jubilated when President Goodluck Jonathan was dragged by Ex Gov Peter Obi to belatedly commission an auctioned 419 2nd Niger Bridge that will be tolled for 25 years. This president while seeking for Igbo votes in 2010 promised to deliver the bridge before the end of his tenure. Five years later and a year to the expiration of the same tenure, they concocted a PPP arrangement to make the Igbo pay for the bridge through the back door”

“These Enugu-Onitsha, Obollo-Afor-Ninth Mile, Enugu-Port-Harcourt South East roads under great state of disrepair were built under the regimes of Shehu Shagari, from Shagari Village of Sokoto State. These roads were completed under the tenure of Muhammadu BUhari from Daura in Katsina State as Military Junta, and rehabilitated by Sanni Abacha , a Kanuri resident in Kano.

“These Roads were built when the Great Zik of Africa as leader of NPP entered into accord with the ruling National Party of Nigeria (NPN) and the Great Zik, with the cooperation of Vice President Alex Ekwwueme , ensured that these roads were built and finished from the scratch.

“Silly politicians, activists, sycophants, bootlickers and all manners of Asmodeus who have occultically claimed Igbo leaderships, have not been able to pressurize either Obasanjo or Jonathan to rebuilt the roads built by northern regimes.

“Laying the blame of these roads on Muhammadu Buhar, fashionable to some ethnic activists and their political cheer leaders is very delusional and hypocritical. Igbos should hold these silly politicians, opinion leaders, activists, technocrats and all the scums who have beclouded our political space are responsible for the state of our rods after sixteen years of fruitless followership of PDP”

Since the menace of Unknown Gunmen UGM in the South East, many Igbo elites have blamed Buhari, Babangda, Dangote, Lai Mohammed, Shehu Sani, Femi Adesina for the UGM. Nobody has blamed Azikiwe, Aguiyi-Ironsi, Odumegwu Ojukwu, and Kaduna Nzeogwu for being the remote causes of the menace, marginalization, criminalization that led to the menace called UGM. This is hypocrisy of the highest order.

Azikiwe gave us ‘One Nigeria’. He is the first importer of ‘One Nigeria’ ideology when other regions are begging to leave the union. When Awolowo and Ahmadu Bello wanted separatist states, he convinced the foreigners and major activists, including the north, that One Nigeria is the best. In 1953 when Northern Nigerians were beginning to consider secession from Nigerian colony that would soon be a nation, Nnamdi Azikiwe gave a famous speech where he suggested that there would be grave consequences if the northern region becomes an independent nation

According to Azikiwe As one who was born in the North, I have a deep spiritual attachment to that part of the country, but it would be a capital political blunder if the North should break away from the South. The latter is in a better position to make rapid constitutional advance, so that if the North should become truncated from the South, it would benefit both Southerners and Northerners who are domiciled in the South more than their kith and kin who are domiciled in the North”

When Kaduna Nzeogwu and some coupists embarked upon the process of putsch to make the progressive minded Yoruba man, Obafemi Awolowo Prime Minister, it was Colonel Odumegwu Ojukwu from Nnewi, who as Military Commander in Kano, foiled the putsch in the North and forced Kaduna Nzeogwu to abandon the putsch and disappear. Ojukwu told us then as Students Union Leaders,and later as activists, when we paid him a courtesy calls, about three decades ago, that he foiled the Nzeogwu Coup in the North because he believes in ‘One Nigeria’. This view of Ojukwu has been corroborated all over Nigeria.

Aguiyi Ironsi had all the time to divide Nigeria but his belief in the ‘Oneness’ of the Union made him to reject the calls for secession till he was brutally murdered by the Gowon-Danjuma conspiracy. The Igbo is the greatest victims of this unitary system of government whereby the national cake is shared at the centre, and they are given the crumbs. Thus Aguiyi-Ironsi introduced this beautiful idea of unitary system which some northern governments have used to under-develop the entire regions of Nigeria through fiscal indiscipline, corruption, marginalization and bad governance.

The same Aguiyi-Ironsi failed to heed multiple warnings that there is plot to assassinate him. He trusted in his ‘Aguiyi’, a Jukun Juju from Taraba, which helped him during the Burma war, instead of proper military intelligence reports of patriotic soldiers, the manner some current secessionists are trusting ‘Odeshi’ to bring about Biafra, and attacking fortified Police Headquarters with Pump Actions, Dane Guns and Charms. Theophilus Danjuma consulted his native Jukun Native Doctors and they gave him the secret of the ‘Aguiyi’ , before coming for the head of Igbo General, and on the D-Day, the Juju failed to Work.

Odumegwu Ojukwu came back from Ivory Coast and joined the Hausa Party, National Party of Nigeria NPN within three months of his return from exile in 1982. He became a proponent of ‘One Nigeria’. In 2003, as presidential candidate of APGA, he formed alliance with Buhari of ANPP, after the presidential elections, but the Obasanjo-Atiku rigging machine with the help of Governors Orji Uzor Kalu and Chimaroke Nnamani never allowed the alliance to come to fruition.

Therefore, Igbos should do some introspection. From Azikiwe to Ironsi to Ojukwu, all of put their lives in line for ‘One Nigeria’ until circumstances caused Ojukwu to declare secessionist Biafra in 1967, albeit belatedly. Therefore, Igbo Youth and the elitist cheerleaders of secession should ask relevant questions, and apportion blames appropriately.

Therefore, if IPOB, MASSOB wants to blame the Fulani, Hausa, Berom, Yoruba and Britain for the fall of Biafra, they should also extend the blame to Azikiwe, Ironsi, Ojukwu who rejected the pleas from Obafemi Awolowo, Ahmadu Bello and frustrated the coup of Kaduna Nzeogwu, intellectually and militarily aligning with the position of the British establishment for the ‘Oneness’ of Nigeria.

Igbos should be careful of any action they are taking in the face of provocations from both internal and external aggressors. Let the blame game stop. Our forebears did not make proper consultations before embarking on actions that ended up reducing us to second class citizens.

The drums of war are beating seriously; alliances are being made, guns flowing from the deserts to the forests, UGM attacking security men on lawful duties, the military arresting and incarcerating innocent persons, herdsmen rampaging on our farmlands, creating unnecessary provocations. The effortless abduction of IPOB leader Nnamdi Kanu by a MafiaSyndicate, and subsequent handover to the Kenyan Government for onward transmission to Nigerian is generating its own tension. Igbos are being encouraged by all sorts of media influencers to war, while theother endangered tribes are issuing mere threats.

They are setting the stage for another massacre of Ndigbo, and I warn our people not to be the fodders that will be used to flame Nigeria and reconcile feuding Nigerian nationalities. Every tribe complained about the excesses of the Balewa Government in 1966, except Hausa and Fulani, but when the war started, they all united to fight the Igbo.

I had warned in a write-up tree weeks to his arrest on June 9th in the piece titled ‘Assassination plot; Buhari, Kanu, Vaccinists, Unknown Politicians’ that” Nnamdi Kanu has been slated for assassination by a mafia group in Europe on the contraction of some ‘Unknown Politician of Northern Extraction’. These politicians believe that he is deliberately causing the destruction of lives and properties of some sections of the country in the South East, gradually dragging the state to a conflict they don’t want to fight, and the cheapest route to end the conflict is to eliminate him”. I cited diplomatic sources for the information. The assassins, fearing their plot has been exposed, initiated plan B, which is abduction and shameful repatriation to Nigeria.

Let Igbo elites counsel the youth, let every step being taken for war, be properly previewed. Igbos cannot afford another mistake. I still will continue to seek for peace, dialogue, consensus, until the warmongers take over. I am fulfilling my God given obligation as a Columnist, Cleric, Human Rights Activist of about three decades, and God will not hold me responsible if the ill-prepared warmongers use Ndigbo the manner they did in 1966, leading to 3 million souls killed.

However, as we blame outsiders for UGM, and marginalization of Ndigbo, let us remember that what we call ’ZOO’ was imposed upon us by Azikiwe, Ojukwu, Nzeogwu and Aguiyi-Ironsi. Let us balance the blame games as we tread our ways carefully out of the ZOO and ensure that we do not enter another version of ZOO in the tactless manner we go about it.