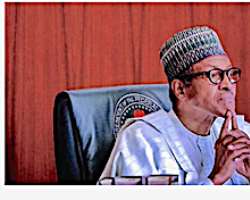 Nigerians in Diaspora Organisation Americas (NIDOA), USA Chapter, has written to President Muhammadu Buhari on some issues affecting the country and suggested a way forward.

In the letter, jointly signed by its President, Dr Eromonsele Idahosa and other officials of the association, NIDOA expressed concerns over the security situation in the country.

The letter said that growth and development could not occur without security.

It described NIDOA as “a non-partisan group of incurable patriots fully invested in the continuing corporate existence of our dear nation as an indivisible entity based on equity, justice, harmony, and progress.

“We are reaching out earnestly to you in view of the recent resurgence in separatist agitations in various parts of the country where tensions have boiled over partly,” the letter reads.

The group said insecurity and instability in the country would continue to scare away potential investors while making it near impossible to guarantee the basic rights of Nigerians to life and liberty.

“We urge you to take immediate action to move Nigeria swiftly in the direction of graduated level of jurisdictional policing authority predicated on community-police philosophy which the Federal Government sought to introduce since 2016.”

NIDOA stated that Nigeria had been scourged with multiple security challenges, including terrorism, banditry, kidnapping, and internecine ethnic skirmishes, noting that these phenomena did not start overnight.

It listed causes of insecurity to include the lack of planning, communal distrust, corruption and incompetence, high youth unemployment, poverty, greed, nepotism, and compromised/ill-equipped security agencies.

“Experts have noted that Nigeria has not conducted a strategic analysis of its security systems and infrastructures since the attainment of political independence in 1960.

“The result is that practices that even the British have jettisoned such as a centralized police force under the command of an Inspector General remain entrenched in Nigeria.”

It stated that most advanced societies had police at the county, city, and state levels so that they could effectively fight crime at the local level with local personnel and command structure.

“The campaign against corruption should be ongoing, total, non-discriminatory, and non-partisan; it should become ingrained in our national consciousness as a people.

“Poverty and ignorance also contribute to our national menace of insecurity to our large population of poor and uneducated citizens.

“Government must move swiftly to reduce and ultimately eliminate the number of out-of-school children by guaranteeing access to education which should be compulsory up to basic education level.’’

NIDOA said the high unemployment situation is a ticking time bomb, urging the government to implement policies that have a direct impact on job creation and entrepreneurship development.

The association suggested that youth should be mentored and engaged productively in nation-building, urging the government to provide skills acquisition training and gainful employment for them after completing their training.’’

The association assured President Buhari of continued support and constructive role in national development, saying it is mobilising the support of Nigerian-American owned/managed businesses and not-for-profit organisations.

“We are mobilising our members to invest in scholarships, skills acquisition, entrepreneurship and career development opportunities for Nigerian youth; the Federal Government is welcome to collaborate with us in this respect.

“The diversity of Nigeria in religion and culture should not be viewed negatively but leveraged as a positive force for development and the secularity of the Nigerian state should be protected,’’ NIDOA said.

It emphasised the need for Nigeria to adopt a true Federal Constitution before the 2023 elections, suggesting the 1963 Constitution and the report of the 2014 National Conference as the basis.

The diaspora organisation advised the National Assembly to review all the previous reports and make fresh recommendations with a view to coming up with a new constitution that reflects true federalism.

“We believe in the promise of a unified Nigeria where every citizen is treated with dignity and respect, justice and fair play,” the letter read.

NIDOA called for the devolution of power from the “over-bloated” exclusive list to a concurrent list to enable states to handle more constitutional responsibilities and unlock the potential of the nation.