Threat Of Secession: Need To Wave The Olive Branch 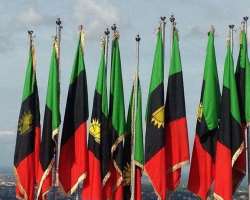 In expressing views on the present state of Nigeria where it is very obvious that the drum of war is been beaten by each passing day with staccato sound that is reverberating from the South East and South West to the remaining 4 regions, it would be foolhardy not to recall the fact that Nigeria has had the worst case of military intervention in politics that led to the civil war between 1967 and 1970 when the eastern portion of the country, under the auspices of late Chief Chukwuemeka Odumegwu Ojukwu, attempted to seceding from the federation. That sordid past is yet to be forgotten, more so when the military regime of Gen. Sani Abacha perpetrated human rights abuses in the 1990s until his own sudden death.

Besides, since secessionists began to agitate for Biafra Republic and Oduduwa Republic, respectively, not few Nigerians that witnessed the Nigerian/Biafran Civil War or abreast of the history of the war have been sounding notes of warning to war mongers in the South East and South West regions. Without doubt, the warnings are been sounded as it is expedient to apprise those who do not understand the sanguinary reality that all wars are horrific, and that civil wars are regarded as the worst kind, as they turn brothers into enemies and force civilians to choose sides. Without coming across as one that is lily-livered, there is wisdom for Nigerians to learn lessons from the Nigerian/Biafran Civil war, and even from that of Sudan/South Sudan and wave the olive branch as seceding into different republics will not augur well for us as brothers even if tribe and tongue differ.

At this juncture, it is germane to opine that agitations around Biafra have drowned out other separatist agitations, giving the wrong impression that Biafra is the only separatist threat in the country. It is expedient to say in this context that there is separatist agitation in virtually every area in the country, and underlying the fact that the foundation for Nigeria’s nationhood remains on shaky ground. Among the Yoruba, for instance, echoes of separatism come in different forms, from a direct call for Oduduwa Republic to those championing a Sovereign National Conference to decide if the federating units of the country still want to continue to live together, and, if so, under what arrangements. In the north, there are intermittent demands for Arewa Republic, while some talk of the “north” as if it is “a country within a country.” In the Niger Delta, apart from the demand for Niger Delta Republic, shades of separatism are embedded in the demands for “resource control” by regional activists. In essence, there is a fairly generalized feeling of alienation and dissatisfaction among the various constituents of the Nigerian federation, a situation that has also deepened mistrust and incentivized separatist agitations. However, because there has never been a referendum in any of the areas agitating for separation, it is difficult to know whether the leaders of the various separatist groups actually reflect the wishes of the people of those areas or whether the agitations are mere masks for pursuing other agendas.

Against the foregoing backdrop, it is expedient to ask Nnamdi Kanu and Sunday Igboho whether they like to have successful secession mission as they respectively eye Biafra Republic and Oduduwa republic. . Of course they would. So would anyone that set out to embark on any mission. After all, nobody sets out with the intention to fail. However, many times people do fail and it is often because they refused to count the cost of such missions ahead of time.

What do I mean by count the cost? Does that have something to do with money? Well, maybe but not necessarily. A Nigerian proverb says, “A child cannot be discouraged from growing big teeth provided he has big lips to cover them”.

Put simply, before embarking on any mission, it is salient plan is made ahead. Such plan no doubt entails taking inventory of everything that needs to happen before pursuing the goal.

Now, one may not know every little detail that needs to be achieved in the process. But there is need to at least get a sense of all the big rocks that need to be accomplished in order for the endeavor to be successful.

Not only can both war mongers be considered to be raves of the moment, it appears they are yet to learn from history. It is expedient they learn from history because countries that seceded in the past have economic indices that are instructive enough.

For instance, a recently gathered commentary on South Sudan has it that “In July of this year South Sudan, the world’s newest country, will mark 10 years of independence. Celebrations will be muted, and they should be. South Sudan is by most criteria a failed state.

“The two long wars that led to the territory’s separation from Sudan left millions dead and meant that by 2011 this was the least developed place on earth. Then, in 2013, came the South Sudanese civil war. Fought largely on ethnic lines over four to five years, this killed a further 400,000 people and forced two million of the country’s population of 12 million to flee outside the country, where they still languish in refugee camps. Some 80 per cent of those remaining in country will need humanitarian assistance in 2021, says the UN. Civil servants have been unpaid for months, and education and health are largely donor-financed. In 2020, Transparency International rated South Sudan (jointly with Somalia) the most corrupt country on earth. It is also perennially deemed one of the two or three most dangerous for aid workers. In few constructive senses is the government present for its citizens”.

In fact, in the absence of the very real human cost, war has also serious economic costs in loss of buildings, infrastructure, and a decline in the working population, uncertainty, and rise in debt and disruption to normal economic activity.

In as much it cannot be denied in this context that Nigeria is been overwhelmed by unprecedented spike of inflation, it is equally instructive to warn that in many circumstances that war can lead to inflation or worsen prevailing inflation, and can in turn lead to loss of people’s savings, rise in uncertainty and loss of confidence in the financial system. Evidences abound on how war ravaged countries struggled financially to meet the cost of the war. Therefore, they started printing money to pay soldiers salaries. But, as they printed money, the value of money soon declined. High inflation hits middle-income savers the most as they see the value of their savings wiped out.

Economists are unanimous in their postulations that hyperinflation is often a result when the war ends. For example, with a devastated economy, in 1946, Hungary and Austria experienced the highest rates of hyperinflation on record.

In as much as I am not in this context blaming neither the government nor the war mongers for the extant heated polity, it is expedient apprise them of an African proverb in this context that says, “If you can’t resolve your problems in peace, you can’t solve them with war”.