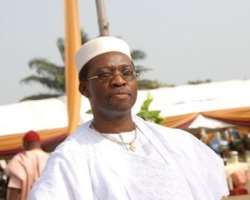 
ASABA, July 08, (THEWILL) – The expected resignation of the Secretary to the State Government of Delta State, Dr. Ifeanyi Okoya was announced to Council members at the Delta State Executive Council meeting today inside the EXCO Chambers in Government House, Asaba.

Dr. Okowa tendered his resignation to enable him pursue his Delta North Senatorial ambition on the platform of the Peoples Democratic Party, PDP in the 2011 election.

According Mr. Djebah; "Dr. Okowa made his decision to quit his office known to the State Executive Council at the meeting which held today in Government House, Asaba.

Dr. Okowa commended Governor Emmanuel Uduaghan for giving him the opportunity to serve in that capacity and thanked members of council and indeed all Deltans for the support and encouragement received from them in the discharge of his onerous responsibilities."

The government spokesman also disclosed that the former SSG used the occasion to formally announce his decision to contest the Delta North Senatorial seat in the National Assembly in the 2011.

The Information Commissioner said that Governor Uduaghan while accepting Dr. Okowa’s decision to disengage his service, acknowledged the immense contributions of the former SSG towards the good governance of the state and the implementation of his administration’s programmes and wished him well in all his future endeavours.

"His Excellency, the Governor recalled the long standing political relationship between himself, the deputy governor and Okowa in the last 11 years and prayed God to guide him in the pursuit of his future endeavours," Mr. Djebah said.