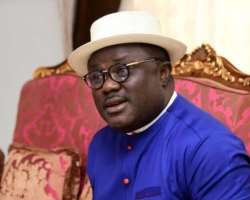 Federal lawmakers elected on the platform of the Peoples Democratic Party (PDP) in Cross River State and stakeholders from the state on Friday disowned Governor Ben Ayade, who defected to All Progressives Congress (APC) on Thursday.

The federal lawmakers vowed never to leave PDP and join the governor in APC, adding that Cross River is home for PDP.

The lawmakers, who said that the governor didn’t consult them before pitching his tent with APC, added that even if they were consulted they wouldn’t have follow him to APC.

Aside the lawmakers, other PDP stakeholders from the state, who were at the conference were , the former governor of Cross River state, Senator Liyel Imoke; Jetty Agbi; Anna Enegbeni; Daye Arikpo; Divine Anong Deputy Nat. Auditor

Addressing newsmen on behalf of the lawmakers and other stakeholders, Senator Bassey said “as far as I know, till date the NASS caucus remains intact. I don’t see any of us leaving. We are legacy members of the party, who bave been in this party for the past 15 to 20 years. So the short answer is no, we are not going anywhere.