Iniobong's Killer, Uduak Frank Akpan Confesses How He Killed Her 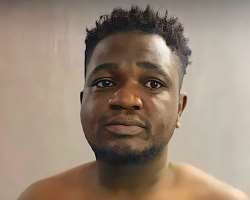 Uduak Frank Akpan, the suspected killer of a job seeker in Akwa State, Iniubong Umoren has revealed that he killed the deceased by hitting her with a stabilizer.

The Commissioner of Police, CP Andrew Amiengheme disclosed this while reacting to a trending online report that the suspect committed suicide while in custody. Amiengheme who revealed that Akpan was still alive described the rumour as a figment of the writer’s imagination and informed that the police will be parading the suspect to further falsify the claims that he was dead.

The suspect Uduak Akpan who spoke with Journalists during his parade by the police on Friday narrated how he killed his victim.

“When she got to the location I asked her if she can work as a Secretary on a farm where drugs are produced and she said yes.

“However, I told her that there were no such existing jobs but that I would love to have sex with her and she accepted on the condition that I use a condom.

“She got furious when along the line I tried to remove the condom and reached for an object to hit me. She also bit me and in anger, I retaliated and hit her with a stabilizer and she started bleeding. “That was how she died,” he said.