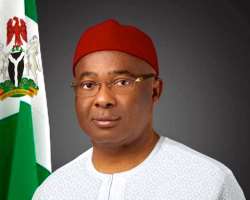 The governor of Imo State, Gov. Hope Uzodinma has dissolved his cabinet. According to reports, the governor dissolved the 28-member cabinet, while retaining eight commissioners for continuity.

“The governor, at his discretion, decided that it became necessary to rejig and re-energise the system for maximum productivity,” she said.

Those retained are the commissioners for information, works, women affairs, technology, finance, health, sports, and tourism.

Declan Emelumba, commissioner for information, who also addressed journalists on Wednesday in Imo, said the governor assured the former commissioners that they will still be found relevant in other areas if eventually they do not make the new cabinet.

Emelumba added that a new cabinet will be reconstituted soon.

This is the first major cabinet reshuffle of the Imo state government since Uzodimma assumed office in January 2020.