Break up? It’s all hot air! 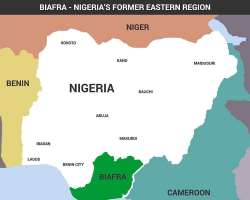 For years, Nigerians were told IPOB was a peace-loving group that was bent on actualising its pipedream of dismembering Nigeria. With coordinated and targeted killings by alleged IPOB footmen in the South East and parts of the South South, we now know Nnamdi Kanu and his henchmen are up to some evil. If there was ever a time for those who thought the Federal Government was wrong in outlawing the group to reflect, this is it.

The Nigerian Civil War, in which we were told had neither a victor nor vanquished, ended in January. Nine years later and, as part of the rehabilitation effort, two Nigerians from the South East, in the persons of Dr. Alexander Ifeanyichukwu Ekwueme and Chief Edwin Ume-Ezeoke became vice president and speaker of the Federal House of Representatives. In the spirit of No Victor, No Vanquished, the South East was rewarded for waging war against Nigeria while the Yoruba-speaking South West which fought for the unity of Nigeria was left in the lurch.

Fast forward to 1993! Of course, the presidential election of June of that year produced a clear winner, Chief Moshood Kashimawo Olawale Abiola, who was eventually denied the crown. Abiola was from the South West that fought to preserve the unity of Nigeria. The Yoruba raised dust in the face of patent injustice done to one of them but, at the end of the day, they elected to work for a united Nigeria. There was never a time the Yoruba adopted breakup as a group singsong. The Obasanjo presidency was a payback of sort for the South West.

As recent as the presidency of Dr. Goodluck Ebele Jonathan, there was no way a Yoruba could have constitutionally ascended the presidency in the event of a vacancy. No way! Though the Yoruba voted massively for President Jonathan, they never featured in the first eleven of the administration and watched by the side-line as others, mainly the South East, literally took over the government. The Yoruba neither whined of being marginalized and never resorted to targeted killings for being sidelined by a government they helped to bring to power. What, then, is the secret of the Yoruba?

Each time the Yoruba found themselves on the back foot, politically speaking, they have always returned to the drawing board to reflect on why and how they lost out. Then, they re-strategize and, like adults are wont to do, they look back to fix what caused the downfall. Top on the agenda has always been to cement old ties and build new political bridges. That, exactly, is lesson the Yoruba learnt from the 1979 elections. The strategy worked in the stillborn Third Republic in1993 just as it is working in the Fourth Republic. Sadly, this political judiciousness is lost on the South East.

It has always been one lamentation after the other and sheer cry over loss each time the South East lost out, politically. The tendency has always been to act like the child who looks ahead after each fall instead of pausing to reflect on what caused the fall. The zone has always resorted to finger-pointing, a lazy and banal idea of blaming others for one’s failings. There is never any form of introspection; no thorough soul-searching! Just whine and wail and lay specious claims to exclusion by adopting marginalization as group anthem. Regardless, it is the South West, not the South East that deserve an apology for being the most marginalized zone in Nigeria!

Cry of marginalization will not disappear because for decades many South Easterners have been lazily primed to believe they are a special breed who are about to be feasted upon by cannibalistic, zoo-living neighbours. And, as part of their final solution to escape the doom, tale-bearing separatists have graduated into arm-bearing murderers in their unholy effort to dismember Nigeria! Several misrepresentations about Nigeria are hatched abroad but the improbable talk of a breakup of Nigeria, either now or in the immediate future, is a home-grown fallacy that was exported abroad. The funny idea of a breakup is given traction by a non-existent north- south religious divide.

Nobody fears a breakup, Czech or Sudan style. Problem here is that each time we talk of a break up, Nigerians do not take into account God’s own hand in the historical events that gave birth to the ‘contraption’ called Nigeria in 1914. Take the seventeen states that today make up the so called Christian south; can we, in all sincerity, carve out a country from there to reflect the Christiannessof the south? Can the predominantly Yoruba speaking south west, where there are as many Muslims as there are Christians, be genuinely referred to as part of Christian south?

In the South West where there are as many Muslims as Christians, it is unlikely that the ‘liberal’ Yoruba Muslim will play second fiddle in the unlikely event of Oduduwa Republic seeing the light of day. In the whole of southern Nigeria, it is in the South-South and the South-East geopolitical zones that we find indigenous Christian populations in the majority. Even at that, there are indigenous Igbo who are Muslims just as we have indigenous Muslims in Rivers and Edo states whose interests must be considered when we glibly talk of a Christian south.

Of the three geo-political zones up north, only the North West may be described as predominantly Muslim. And even in the North-West, just like the South-East and South-South, there is a significant indigenous Christian population whose interests must be considered. The Northeast and North-Central geopolitical zones are a different kettle of fish as there is no state in the two zones where Christians could be referred to as an insignificant minority. And, by the way, which state in the whole of the North-East is, in the real sense, predominantly Muslim? Not even Borno, the epicentre of Boko Haram! Where, then, is the Christian South and Muslim North?

Each time people marshal arguments in support of a breakup, the impression one gets is that the position emanates largely out of frustration. And frustration denies man the ability for rational thinking. The frustration, especially among Nigerians, is the result of the parlous state of the nation’s economy, especially in the north, where the problem of deficit leadership, comparatively speaking, is more pronounced. Without exception, most of the killings in the land which we attribute to religion and politics have more to do with the economy.

This is not time for Nigerians to throw up their arms in utter despair. Of course, there is frustration in the land but, bad as it seems, the situation is not beyond control. As a remedial measure, Government should, as a matter of urgency, enlist a minimum of 100,000 young men into the fighting force. And, for God sakes, the exercise should be devoid of the piece-meal recruitment where prospective recruits give bribe to get enlisted as has been the case with recent exercises. Furthermore, dispensation of justice must be swift and criminals should get more than mere slaps on the wrist. The present cumbersome and opaque judicial system sends out wrong and conflicting signals.

We only delude ourselves to expect only prayers to squelch the hot air in the land and fix criminality. Even criminals pray!