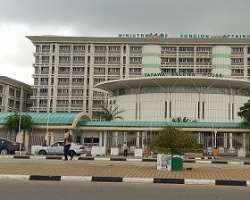 An audit conducted by the Office of the Auditor-General for the Federation on the account of the Ministry of Foreign Affairs has revealed financial misappropriation of over N6.46bn in the management of financial resources of the government.

The discovery was made by the Office of the Auditor-General of the Federation in its Audit Report for the Ministry.

The Audit Report showed that the Ministry committed a total of eight infractions that led to the mismanagement of over N6.46bn.

The infractions are doubtful allocation of N3.12bn made by the Ministry to Foreign Missions without approval from the National Assembly or other relevant documents to authenticate its usage; unaccounted N1.6bn for postings/return claims of members of staff; and unauthorised virement of the sum of N419.17m.

Other financial infractions committed by the Ministry are the diversion of N394.88m meant for the completion of its headquarters building; payment of N600m to three Nigerian foreign missions without supporting documents; inappropriate payment of N89.9m as ‘warm clothing allowances’ to staff of the ministry; debt of N26.4m incurred by the Ministry to fund estacode allowances without approval from the Debt Management Office; and payment of the sum of N202.62m for ‘doubtful services.’

Providing further insights to these infractions, the Auditor-General’s Audit Report stated that despite audit queries raised by his office on the matter with the management of the Ministry of Foreign Affairs, no response was received on the infractions.

The Report stated that the N3.12bn which was released to the Ministry during the period of the audit in 2019 had no virement approval from NASS or other relevant documents to authenticate its usage.

It stated, “Audit observed that out of the sum of N5,251,070,000 released to the Ministry, by the Accountant General of the Federation through the Development Fund General Warrant for its projects and programmes, only N2,125,250,000.00 was budgeted for by the NASS as contained in the Appropriation Act and expended during the period under review.

“The balance of N3,125,820,000 which was released to the Ministry during the period had no virement approval from NASS or other relevant documents to authenticate its usage.

“The non-attachment of relevant documents made it difficult to authenticate the validity, genuineness and correctness of the transactions that led to the payments. This may lead to irregular expenditure and poor cash management.”

The Auditor-General in the Report recommended that the Permanent Secretary be required to justify the irregular expenditure incurred, failing which he should recover the sum of N3.12bn and pay back to the Consolidated Revenue Fund.

It added that “Sanctions in line with Financial Regulation 3106 should apply.”

On the unaccounted N1.6bn for postings/return claims of members of staff, the Audit observed that the amount was released for the payments of postings of the Ambassadors and other Officers of the Ministry.

Giving a breakdown of the amount, the Report stated that N1bn was released for the postings of newly appointed Ambassadors; N300m for the newly Posted Officers to foreign countries and N300m was used for the payments of allowances of the Returning Officers.

It added, “However, no supporting documents such as Expenditure Returns from Mission, Payment Vouchers were made available to confirm that the funds had been expended in accordance with the reasons for which the funds were released.

“This anomaly was as a result of the Ministry’s failure to observe due process in the disbursement of government funds. Risk Government monies might have been spent on purposes not intended while other obligations of the Ministry might not have been met.”

“The building was completed, commissioned and occupied, yet the balance of the sum of N394,881,441 was found to have been diverted for other Capital projects without seeking approval as required by the law.

“This anomaly happened because the Ministry allowed expenditures to be made without approval from the National Assembly.

“The transactions are considered as misapplication of public funds, which can lead to loss of public funds. No response from management as at the time of our report. The Permanent Secretary is required to provide the evidence of proper approval from National Assembly for virement, otherwise, he should recover and pay into the government account the sum of N394,881,441.21 expended without due process. Sanctions in line with FR 3106 shall apply.”

“However, there were no supporting documents such as PVs, contract agreements, letter of awards, Bill of Quantities, MTBs approval, etc. The above anomaly is because of the Missions’ violation of due process in public expenditure.

“The implication of the above is that government funds may be inappropriately utilized, and monies may not be available to carry out budgeted programmes and projects.

It added, “Staff were overpaid based on our computation. The payment of warm clothing allowance is at the rate of $720 for a period of three years and should have been at the exchange rate of N305 as at 2016.

“Payment of clothing allowance totalling N89,090,000 was made from the capital allocation, rather than the recurrent allocation. This anomaly is due to the Ministry’s failure to adhere to extant regulations on expenditure of government funds.”

The Report directed the Permanent Secretary to recover and refund the overpayment of Warm Clothing Allowances.