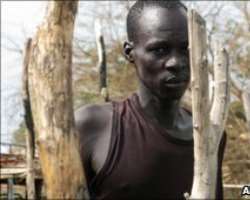 Recent killings in Sudan's Abyei region are intended to affect next year's referendum on independence for the south, a local official says.

In the referendum, the contested oil-rich region will decide whether it wants to join the south if it secedes.

Abyei's chief administrator said the attacks were aimed at emptying the area of ethnic Dinka residents, who are seen to be loyal to the south.

Such charges are rejected by the Misseriya people, seen as pro-northern.

The referendum was part of a 2005 deal to end decades of north-south conflict.

Meanwhile, the authorities in Khartoum have stopped the distribution of three northern daily newspapers felt to be supporting a north-south split.

Al-Intibaha, Al-Tayyar and Al-Ahdath are reportedly not for sale on the streets of the capital.

“The decision comes within the context of efforts to contain the negative role played by the paper [Al-Intibaha] in strengthening separatist agendas in both south and north Sudan,” privately owned news website Sudanese Online http://www.sudaneseonline.com/ quoted the head of the intelligence services as saying.

Politically motivated
The BBC's Peter Martell in the southern capital, Juba, says Abyei is home to both the Dinka ethnic group, seen as supporters of the south, and the pastoralist, Arabic-speaking Misseriya people, seen as northerners.

Abyei's chief administrator Deng Arop Kuol said the killings on Monday of five villagers were carried out by the Misseriya.

“It is politically motivated. They are trying to disrupt the referendum activities, particularly the voter registration,” Reuters news agency quotes him as saying.

Residents of Abyei will be voting in January in a seperate referendum on the same day as the southerners vote on independence.

Following heavy fighting two years ago, in which at least 100 people died and some 50,000 fled their homes, Abyei's borders were fixed by an international court in The Hague last year.

It was a ruling that was accepted by both sides, our reporter says.

But Arop Madut, a member of parliament in the Abyei Legislative Assembly, says the attacks are also intended to disrupt the process of marking out the region's border.

“The intention is of course to prevent the demarcation of the Abyei border in accordance with The Hague ruling, and to dislodge the Dinka population of the northern area,” he told the BBC.

Our reporter says such claims are rejected by the Misseriya, who argue their people have traditionally moved in and out the region in search of fresh grass for their animals.

This sometimes leads to conflict with Dinka herders over access to pasture and water-points.

During the 21-year north-south conflict, some Misseriya groups fought with the pro-government forces.

While a committee between north and south has been formed to negotiate the referendum for the south, the commission intended to hammer out a peaceful future for Abyei has so far made little progress, our reporter says.

Many warn that time is rapidly running out to ensure the forthcoming referendum passes off peacefully.

An estimated 1.5m people died in the civil war between north and south, which is separate to the conflict in Darfur to the west of Sudan.