The Spell Of The Anambra Anthem. (video) 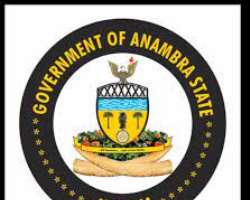 Well...let it sink now; Willie Obiano has got us all singing. When leadership does it's job well, it rouses the people to a song. With the melodious Anambra Anthem, Obiano has roused Ndi Anambra to a song.

Indeed, the Anambra Anthem is probably the best state anthem in Nigeria today. The impact of this 17-line song is always instantaneous on the listener.

Three years ago, the Resident Representative of the United Nations Development Programme (UNDP) in Nigeria, Mr Edward Kallon came under the spell of the Anambra Anthem and blinked twice. Applauded the lyrical power of the Anthem, Mr Kallon described it as sufficiently capturing the essence of the UN's Sustainable Development Goals.

In his own words, Mr. Kallon said: “I was inspired when I heard the anthem of Anambra State. I was inspired by the well selected words of the lyrics. And we are here today to talk about Sustainable Development Goals partnership. Your Excellency, your state anthem already clearly indicates what we hope to achieve from the Sustainable Development Goals.” According to him the Anambra Anthem clearly communicates “national vision, national leadership and national ownership. When I listen to the Anambra Anthem, I see all those three visions. And that is all that the SDG is about. National vision, national leadership and national ownership to drive the development aspirations of the people of Anambra State."

Kallon is not the only one touched by the sublime power of the Anambra Anthem. At its formal presentation in June 2014 to mark Obiano’s First 100 days in Office, novelist, Chimamanda Adichie glowed with pride; an angelic smile lighting up her face when the audience stood up to sing the anthem with the verses scrolling on the big screen. Adichie had just delivered yet another seminal lecture in which she had admitted that there was a time when she didn’t feel proud to come from Anambra State. Entitled "Community and Consensus: My Hope for Anambra State," Adichie had recalled in the lecture - "But the truth is that I have not always been proud of Anambra. I was ashamed when Anambra became a metaphor for poor governance, when our political culture was about malevolent shrines and kidnappings and burnt buildings, when our teachers were forced to become petty traders and our school children stayed at home, when Anambra was in such disarray that one of the world’s greatest storytellers, Chinua Achebe, raised the proverbial alarm by rejecting a national award."

Adichie is not alone. Former Commonwealth Secretary General, Chief Emeka Anyaoku had reacted much the same way when he first heard the Anambra Anthem. It was at the gathering of the state’s great sons and daughters during the Security Fundraising at the MUSON Center, Lagos. Chief Anyaoku had flittingly shut his eyes while the Anthem was going on, lulled to a blissful state of serenity, allowing the lyrics to drizzle tenderly all over him.

Adichie and Anyaoku are among many people that have felt deeply, the power of Governor Willie Obiano’s invisible efforts to awaken Ndi Anambra. Not many people are aware that beside the smooth roads and flyovers, beside the ceaseless war against crime, beside the gleaming tower of Anambra International Airport, Governor Obiano had championed a sublime effort to instill a new consciousness in the people, shore up their pride and rebuild the moral fabric of the society. Not many people are aware that there is a subterranean campaign to mold future generations of Anambra children into a set of rightly turned-out, self-aware, self-respecting and proud citizens of Nnamdi Azikiwe’s home state.

So far, the campaign has yielded bountiful fruits. Anambra school children have shocked the world twice in global contests in science and technology. The Golden Girls of Regina Pacis Secondary School Onitsha and the Bronze Boys of St John's Technical and Science College Alor are clear proof of the success of this campaign. The Anambra School Debate Team that has won the President's Cup for keeps after beating other teams in Nigeria for three consecutive times and winning bronze at the World Schools Debate Championship in Singapore have given credence to this assertion too. There are other proofs but this two will do.

Anambra Anthem was created by Brande Aristortle/Winning Concepts Ltd headed by the PR guru, Mike Meze. Under Meze’s tender hands, the agency also created all the totems of corporate identity for the state including; stunning logo or crest, corporate colors, shared values, the Anambra Way etc. However, providing insights into the Anambra Anthem, the composer of the anthem, Mr. Tony Odili Ujubuonu explained that he was inspired to write it by the illustrious history of Anambra State, its legendary citizens and its contributions to Nigerian history.

Mr. Ujubuonu, a multiple award winning novelist and a highly sought after advertising copywriter said, “In writing that anthem, I was trying to tap whatever inspired Anambra’s legendary men and women in order to inspire the people of tomorrow and the people of today.”

Enjoy this visceral interpretation of the Anthem as visualized by James Eze and crafted by Joe Nwabrije (Big Joe Productions).