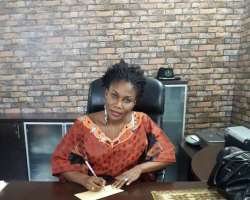 From Collins Arthur Madumere, [Citizen Reporter]
A Nigerian businessman, Mr. Nicholas-Ubechu Chukwubuike Nelson, has disclosed how he was allegedly defrauded to the tune of N1.2M by one Dr. Chdimma Sandra Duru, who is said to operate some companies as fronts in the said fraud deal, which seems to be a high organized fraud outfit set up to defraud unsuspecting victims.

Documents obtained by this blog show that Sandra is the Chief Executive Officer and Executive Director of Pre-Adult Affairs Organization (PAAO). But sources who know Sandra well alleged that apart from her current victim she had allegedly defrauded some top government officials in the country, including a deputy governor whom she blackmailed , until the bubble burst and she ran away.

According to them, Sandra is said to be very smart and runs away whenever she suspects the game might be up for her, and then she allegedly switches on to another victim.

But Mr. Nicholas said that he is Sandra’s latest victim who coughed out more than N1.2M to her for trip to the USA for a training programme allegedly organized by PAAO. According to him, he was contacted into the deal by the said Sandra to attend the training and facility tour allegedly being put together one of her front companies, PRE-ADULT AFFAIRS ORGANIZATION (PAAO), with corporate office at 19A Community Road, off Allen Avenue/Ogundana Street, beside Galaxy Television, Ikeja, Lagos, Nigeria.

According to the letter of introduction sent to the Visa Officer, Embassy of the United States of America on August 4, 2016, introducing Mr. Nicholas for his visa interview, and obtained by this blog, PAAO was founded on 18 September 1999 by Dr. Sandra C. Duru and registered as Non-Governmental Organization, with commitment to the “improvement of the health status of Nigerian women and the economic conditions of young Nigerians via provision of high quality charitable services for the welfare of women and young people.” The letter also said that Mr. Nicholas was being invited by their “US partners The Infinite Foundation INC. (TIF), California USA for training purposes in preparation for our the UNITY & PEACE (UP) PROJECT 2016/2020, FACILITY INSPECTION TOUR for the 60 days UP PROJECT HOUSE and INTERNATIONAL PEACEFUL CO-EXISTENCE CONFERENCE FOR NIGERIAN STUDENTS, slated to hold in California later this year (2016) and to also attend THE Ist ANNUAL NIGERIAN PRIME DAY/FUNDRAISING EVENT to be held at the HAWTHORNE MEMORIAL CENTER (3901 W EI Segundo Blvd, Hawthorn CA, 90250) ON August 27, 2016”.

“All these organizations would seem to anybody to be clean organizations with clear goals as stated, but they are fronts in the well organized international fraud business”, said embittered Nicholas.

Narrating how he was lured into the deal, Mr. Nicholas who said he did not like travelling, said that he “was introduced to the US training and facility inspection tour as a free programme to be fully sponsored by the organizations, but after sometime she requested initial N60,000 from me”.

“I was surprised but I paid the money nonetheless, because I considered it was not too much of a contribution for the US trip which I reasoned would also afford me the opportunity to visit the USA for the first time. Little did I know I was falling for a fraud syndicate”, he said. However, the identity card issued to Mr. Nicholas by the alleged front organization PRE-ADULT AFFAIRS ORGANIZATION (PAAO) identified him as the REGIONAL DIRECTOR (SOUTH EAST).

Also, Sandra had through a whatsapp message on 26 July 2016, informed Mr. Nicholas: “Nwanne, your appointment date is on the 18th August 2016, at 8am, American Embassy, Walter Carrington, Lagos.” But after all the shows, there was no success.

Sandra was said to have demanded further payment from Mr. Nelson, necessitating the payment of N1,218,000 to her. The demand for payment ran contrary to the resolution of the Board of PAAO which was communicated to Mr. Nicholas, dated 4th June, 2016 and signed by Dr. Sandra Duru, the CEO/Executive Director of the organization: “That the organization [PAAO] will undertake all expenses of all delegates, including Air Fares, Logistics, Accommodation, Feeding and travelling allowances for the duration of their stay in the United States”. But Sandra would later go on and demanded and received the sum of N1,28,000 from Mr. Nicholas.

But seeing that the deal had gone dead as he did not get any visa for the programme and the programme did not hold, Mr. Nicholas contacted Sandra and demanded that she refunded his money. On Tuesday November 29 2016, she sent a whatsapp message requesting the account number of Mr. Nicholas.

Waiting hopelessly for his money for sometime without any communication from Sandra, Mr. Nicholas sent her a whataspp message, saying: “Since I gave you the account have not heard from you. And this is year ending. Are we going to continue this next year [2017]?”

But in response, Sandra also through a whatsapp message to Mr. Nicholas, said: “Mr. Nelson, I was going to give you [the money] from my pocket because of the respect I have for my brother Collins and considering that I did not eat food [with] your money, but did all we were supposed to do and waiting for the person who worked with our agency to refund all that failed by March 2017 since you didn’t want to reapply the next month after the election of which many did through them and got. But when your insults and unwarranted threat to me was getting too provoking and annoying, I decided to wait patiently for the due process and forwarded your account to them to either pay you directly or pay into mine and I remit into yours by March, 2017, and that was the reason for asking for your account details and I blocked you to avoid further insults and threat of words. Okay.”

Also, on October 10 and 27 2016, Mr. Nicholas had through whatsapp message told Sandra that he needed to know when he would get his money back. He also expressed his frustrations with the way things had gone, saying: “I don’t know your reason for not replying my message after reading it. I was at your address in Lagos and not find anyone there. If I don’t get my money you will not like what will happen. Trust me.”

But sounding confident and triumphant, Sandra also responded, saying: “Listen, your threats won’t move me at all. You can also ask Mr. Collins about me if you think I am stupid.”

Sandra is said to have been at large and cannot be found in her given address. She has since blocked Mr. Nicholas on Facebook and other social media platforms. But she would threaten Nicholas, saying that he could do nothing and that she was ready to play on with him, to the point of calling him an idiot.

“How dare a man with family threaten me? Let’s roll. Can you imagine Collins and I have been writing each other and I don’t want to bother myself writing front and back. But for this reason, I swear, I am in. Idiot!”

“With her threat not to refund the more than N1M she received for the programme and the boasting that nothing could happen to her, Sandra has since ran away, and every effort to reach her has not worked.

But Sandra has since abandoned her accounts with GTBank number 0005076980, with Duru Sandra Chidimma as account, fearing she was being followed. At some point she resorted to making use of her ATM, but investigations suggest she might have fled the country.

“I have been told that Sandra goes about defrauding high profile people in the country with her partners in crime. I fell for her because I was unsuspecting. I took her on the face value and I went in and paid for it.

“I am only alerting the public to be wary of this character so that she does not continue to defraud people”, said Mr. Nicholas.

“I have discovered that she did not really have any partner in the US and that the foreign line she uses for her fraud activities is not really a foreign number. She does all her dirty deals right from her residence in Lagos.

“She even had a way of getting information on what is going on. She paid some unemployed youths in the area who look out for people looking for her and then sends the signal to her that she was being looked for”, he added.

Mr. Nicholas is not the only person that believes Dr. Sandra Duru-Eluobi runs scam organization. Writing on Facebook which was monitored on Dr. Sandra’s wall, Mr. Terry Maple said: “Sandra Duru is a fraud. She’s now scamming others in the USA. Everything written about her on Wikipedia, or her Facebook is all made up. The law here is on her. She’s been taking money from people for years! Her kids are not safe and one of them is in the custody of the state. She prostitutes and is taking welfare from our country”

“Sandra Duru is the one scamming. She’s fake I have proof to what I am saying!!”

However, our investigation also indicates that the CEO and Executive Director of PAAO, Dr. Sandra Chidimma Duru-Eluobi, also operates another front organization in the name of NGO called Recession Alleviation Awards (RAA). Also, our investigation further revealed that in the last 10 years, Mrs. Sandra Chidimma Duru had married two husbands and had child with each and was reported to have been estranged with both.