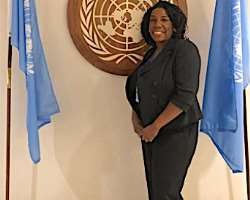 Women’s History Month is dedicated to reflecting the frequently overlooked contributions of women in this country and around the world. From Amelia Earhart to Rosa Parks and from Indira Ghandi to Saima Mohsin, the recognition that women secure social progress, fundamental freedoms and human rights must be front and center. For over 100 years, valiant women who refuse to be silenced have led the fight against voter disenfranchisement and suppression. It was and remains women at the forefront of the movement enacting legislative change pronouncing that every person is deserving of the rights and responsibilities of citizenship.

As we honor the ongoing work of women to gain equality and acknowledge their contributions to the world, we cannot abandon the personal stories of each of these pioneers. The “backstory" of each woman must be integrated into their national narratives. Otherwise, true and complete recognition can never be given. The truth of the matter is that behind every woman who has made history or otherwise changed the world, is a story about how that same woman simultaneously loved, cared and provided for her children, family and herself. Indeed, “herstory” unlike history has never quite been told.

This is why I honor and appreciate the ongoing work of the American Human Rights Council (AHRC-USA). AHRC’s participation in the Women’s Delegation of the United Nations Conference on Women assures that “herstory” is never sidelined. As a delegate to the United Nations conference, AHRC sends me annually to participate in the global strategization of the economic, political, and social achievements of women around the world. At these conferences, I have the privilege of hearing the up close and personal stories of survival of these warrior women. The narratives of these heroines whether from Serbia, Solomon Islands, Malaysia, the European Union, the State of Palestine or from the US, all have a common thread. The stark commonality is the demand for health, education, economic and human equality. It was in hearing these global stories that I got chill bumps. As an attorney representing the rights and desperate needs of women in our community, I realize these are my clients’ stories too. Our mothers and young girls need opportunities and resources. Our women are still suffering from institutionalized sexual assault while Female Genital Mutilation (FGM) still horrifies the dreams and realities for women around the world. This year I am participating in AHRC’s Women Delegation to the upcoming - sixty-fifth session of the U.N. Commission on the Status of Women (CSW65). This session is scheduled to be held from 15-26 March 2021. This year’s theme is “Women's full and effective participation and decision-making in public life, as well as the elimination of violence, for achieving gender equality and the empowerment of all women and girls.”

AHRC invests in the “back stories” of survival of women because it is these messages that thrusts a new generation of women warriors to the front lines. Daily, I fight for the rights and liberties of marginalized and disenfranchised people throughout this country. The question always revert back to how can a person “Pull themselves up by their bootstraps” when they do not have a pair of boots? Economic empowerment can only be manifested by governmental structural change. That change occurs only when warriors like these women ignite the fire fueling necessary change. AHRC is that fuel providing the necessary tools, resources and opportunities to women like me and countless others to continue to be that voice that agitates, shakes, and shatters norms until real change is evidenced locally and globally.

Attorney Allison Folmar has written public policy guidelines within the United States Department of Justice that affords equal opportunity for otherwise marginalized individuals and families. Her legal advocacy implemented policy changes mandating Michigan Circuit Court judges cease oppressive dispositions impacting children and their struggling parents. She is a Commissioner with the International Citizens Commission on Human Rights where she legally structures International Human Rights Reform. She has received a United States Congressional Recognition for her fearless legal advocacy in advancing Human Rights. She is the Principal Attorney at her thriving law practice of 22 years and the extremely proud parent of a college student at The College for Creative Studies.