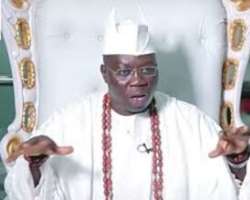 By NWAFOR SUNDAY
Aare Ona Kakanfo of Yorubaland, Iba Gani Adams, has revealed how Iskilu Wakili accused by Ibarapa residents of being behind atrocities committed in the South-West by herdsmen, became powerful in the South-West.

In an exclusive and educative interview with VanguardLive, Gani Adams said that Wakili and his group were among those mining solid minerals at Igangan.

He noted that the illegal mining business was one of the sources of Wakili's money and power to buy guns that led to kidnappings in the area.

Speaking further, Adams enumerated several communities in the South-West which bandits have occupied.

He noted that bandits are illegally mining solid minerals and gold in the communities mentioned.

According to him, “As I am talking to you, do you know that our precious gold is being mined illegally by some bandits in Owo, Oluse village?

“Helicopter will come from sky and drop gun and food items for them.The Ondo state government cannot enter the forest.

“The Owo people cannot enter that forest. As I am talking to you some illegal miners are mining our gold at Ilesha and Ile-Ife. Do you know what degenerated into the crises of kidnapping in Ibarakpa?

“They were mining solid minerals at Igangan. That was one of the resources that gave Wakili more money to be more powerful to buy guns that led to kidnappings.

“These are the resources that the generations unborn should use to survive to build a very good society that we will be proud of.

“By the time you allow foreigners to come and take all your resources away, what would you leverage on in another 30 years.

“No Yoruba person can go to Zamfara and mine their gold. Apart from that, the issue of insecurity is highly germane in Yoruba land. Not only Fulani herdsmen. I am telling you authoritatively.