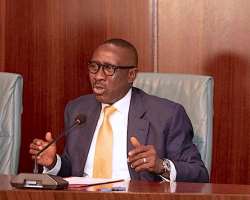 …my hands are clean, says Buratai
…I was misquoted, no missing funds – Monguno, NSA

The Presidency has said no money for buying arms to fight insurgency is missing as being reported in the media.

But Senior Special Assistant to the President on Media and Publicity, Garba Shehu, in an interview with Channels TV on Friday night assured that the $1 billion taken from the excess crude account was being utilised for the purpose and that nothing was missing.

He said the reference by it in the interview of the BBC in Hausa service by the national security adviser, had been misconstrued and mistranslated.

Shehu said the NSA made two critical points, which were that “One is that we don’t have enough which is a statement of fact, and two, procurements made have not been fully delivered.”

He explained that in August 2018, they allowed the Nigerian government to buy 12 super Tucano light aircraft suitable for the kind of war the nation is fighting in the north-east.

In addition to the Super Tucano, other arms of the military had also made procurement.

Shehu said the navy has done nearly 100 percent of their procurement, with the equipment delivered, adding that the Air Force had bought a number of attack helicopters.

Thirty-five helicopters were bought from Ukraine, he said.

He added that some of them had been commissioned on national television.

He said that the nation had bought a lot of drones.

He lamented that with the army, there had been problems with procurement, as the equipment had been coming in bits and pieces, which is not ideal.

“In fact, our biggest procurement is coming from the UAE. As I speak to you now, it is held up in a situation only diplomacy will resolve.

“We were talking to them last week; the Nigerian minister of defence actually had a meeting with the ambassador of the UAE to Nigeria, and the idea is to resolve this so that the equipment held up will be released. We need them here,” he said.

Shehu stated that all these procurements were ongoing, stressing that the NSA did not make accusations of misappropriation, because there was none in dealing with this matter.

He said he has heard the interview on radio and at no point did the NSA said that money were appropriated and there were no arms to be seen.

“They have not been delivered; yes, that is correct, but the thing is that they are things you buy on order, not off the shelf,” he explained.

Buratai, in a statement issued by Osuagwu Ugochukwu , Attorney to the former Chief of Army Staff, said his attention has been drawn to an interview granted BBC by National Security Adviser (NSA) RTD Major General Babagana Monguno wherein he was alleged to have accused former service chiefs of filtering arms Fund away.

“I can confirm that LT General Buratai and other ex-service chiefs were never mentioned in the interview and neither was any arms fund missing under the stewardship of LT Gen T.Y Buratai.

“Interestingly, NSA Babagana Monguno has denied making such accusations. We therefore urge members of the public to discountenance any such misquoted narrative suggesting sleaze on the integrity of RTD LT Gen T.Y Buratai,” he said.

He added that anyone interested in knowing how arms were procured by the ex-service chiefs and particularly LT Gen T.Y Buratai should channel such request for information to the Ministry of Defence and stop the habit of speculation and false information peddling.

“Because any attempt to further tarnish the image of the former Chief of Army staff will be resisted legally,” he said.

However, the National Security Adviser, NSA, Babagana Monguno has backtracked on comment that billions of naira meant to procure arms in the fight against insurgency were missing under ex-service chiefs.

Monguno, in a statement on Friday said he was misquoted in the BBC Hausa Services interview.

According to the statement, the NSA was quoted out of context as he did not categorically say that funds meant for arms procurement were missing under the former Service Chiefs as reported or transcribed by some media outlets from the BBC interview.

It added that during the interview, the National Security Adviser only reiterated the Federal Government’s commitment to deal decisively with insecurity and stated President Muhammadu Buhari’s continued commitment to provide all necessary support to the Armed Forces, including the provision of arms and equipment.

The statement said what Monguno told the BBC was that the President had provided enormous resources for arms procurement, but that the orders were either inadequate or yet to be delivered and that it did not imply that the funds were misappropriated under the former Service Chiefs.

The statement further added that what the NSA said was that the President was following up on the procurement process as was usual with contracts relating to military equipment, and that in most cases, the process involved manufacturing, due diligence and tedious negotiations that might change delivery dates.