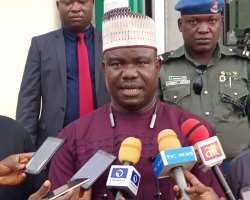 The attention of the National Vice Chairman (NVC) of Peoples Democratic Party (PDP), Southeast Zone, Chief Ali Odefa has been drawn to a sinister grand plan by the Governor David Umahi led Government of Ebonyi State to plant incriminating items including Improvised Explosive Devices (IED) and other unauthorized weapons around him (the NVC) as part of a larger devious plans to tag Chief Ali Odefa as the sponsor of the Eastern Nigeria Security Network (ESN), thereby pitting him against the Federal Government of Nigeria.

It has become necessary to alert the good people of Ebonyi State and the general public of the unrelenting efforts of Governor Umahi and his agents to muzzle dissenting voices in Ebonyi State through any means possible including fabrication of lies, intimidation and outright violence.

The examples of Mr. Charles Otu, Edward Nnachi (Punch) and Chijioke Agwu (Daily Sun) who were brutally attacked for doing their journalistic jobs in the State and many other Ebonyians who have been violently attacked for holding opinions seen as being different from that of Governor Umahi abound.

The public will recall that in November 2020 when governor Umahi embarked on his lone defection to the All Progressive Congress (APC) from the PDP, he made wild accusations against Chief Ali Odefa and other leaders of Ebonyi State, including the former President of the Senate and former Secretary to the Government of the Federation, Chief Anyim Pius Anyim, the former Governor of Ebonyi State and the Senator representing Ebonyi North in the Senate, Dr. Sam Ominyi Egwu and the lawmaker representing Ebonyi Central, Senator Obinna Ogba.

In that wild accusations, Governor Umahi had accused the afore mentioned leaders of the PDP of being sponsors of cultists and the Indigenous People of Biafra (IPOB), all in a bid to pit them against security agencies and the Federal Government of Nigeria- of course, the lies failed like the pack of cards that they really were.

The latest evil plan of the Government of Ebonyi State and its agent to yet again make an attempt to damage the reputation of Chief Ali Odefa through the planting of incriminating IEDs and other prohibited items on him will also fail.

Intelligence reports indicate that the planned planting of IEDs around Chief Ali Odefa is intended to also include Chief Odefa’s business concerns in Ebonyi State and those of his supporters and other prominent members of the PDP. A case in mind is a similar plan that was hatched against the Caretaker Publicity Secretary of the PDP Ebonyi State chapter, Barr. Silas Onu whom Governor Umahi has been consistently harassing and eventually declared wanted on the trump of charge of being the instigator of the ongoing communal crises in Effiom community in Ohaukwu Local Government Area of the state. Whereas, Mr. Onu’s is neither from Ohaukwu Local Government Area nor resident of Effiom community, the government went ahead to place a bounty on him in order to run him out of the state in a bid to stifle information flow within the members of the PDP in Ebonyi State.

It has become very urgently necessary to call the attention of Security agencies including the Nigeria Police, Department of State Services (DSS), the military and the Nigeria Security and Civil Defence Corps (NSCDC) to intensify surveillance on the agents of Ebonyi State government as well as Governor Umahi’s hatchet men to forestall any intended violence they may have planned to foist on the people of Ebonyi State through the detonation of IEDs in any part of the state.

As a law abiding political party, promoter of democracy and the freedom that comes with it, the PDP Southeast zone wishes to admonish Governor Umahi to play politics in line with the sacrosanct provisions of the Nigeria’s 1999 Constitution as amended which guarantees the freedoms of speech, association as well as the freedom to aspire for various leadership positions in Nigeria.

The PDP will never be cowed, blackmailed or intimidated. The PDP established and nurtured the democracy Nigeria is enjoying today which Governor Umahi is a major beneficiary, we shall therefore, not keep quiet and allow undemocratic forces to truncate our hard-earned democracy for their selfish interests.

Nigeria security agencies must be alive to their responsibilities, uphold the law which they are constitutionally empowered to protect and save the people of Ebonyi State from the government of Governor David Umahi.