We Must Resist The Bandits - Major General Magash (Rtd.) (Hon. Minister of Defence) 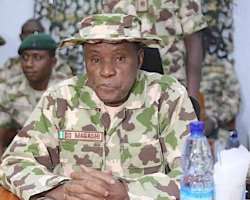 The Minister of Defence, Bashir Magashi , has expressed that Nigerians should not show cowardice in the face of attacks from bandits.

He made this comment while speaking with newsmen after the screening of service chiefs by the House of Representatives on Wednesday.

Magashi expressed that security is not the sole responsibility of the military. He added that Nigerians must join the fight against bandits and other miscreants threatening the nation’s peace.

Magashi, however, kicked against the calls for legalization of firearms for civilians, noting that citizens need to show that they are not afraid of bandits.

“We shouldn’t be cowards. Sometimes the bandits come with about three rounds of ammunition and when they fire shots everybody will run. In our younger days, we stand to fight any form of aggression.

“Why should people run away from minor, minor aggressions? We should stand and face them. If these people know that the people have the competence and capability to defend themselves, they will run away,” the minister told newsmen.