He will Bring Decorum, Discipline, Intellectual Culture and Commitment to Economic Development in Kenya's Politics
By Alexander Opicho - Lodwar, Kenya 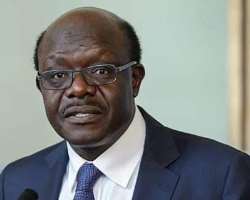 Dr Mukhisa Kituyi is back .He has been serving as the president of UNCTAD for the past eight years, before that he had served as a trade and industry minister in Kenya and a long-term liberation politician that fought to liberate Kenya from the poisonous fangs of Daniel Moi's Dictatorship. Now, he has declared his interest in vying for Kenya's president come the year 2022.

This wise and timely move need to be supported by the people of Kenya. Looking at the Current Kenya , it is evident that it is only Dr. Mukhisa Kituyi that offers a good option. He is the only person who has the necessary leadership experience, practical education, depth of character and pertinent leadership charisma to bring to Kenya's political platform and landscape the long awaited and overdue political decorum, political discipline, intellectual culture and as well as commitment to economic recovery and development. Those that have been yapping and harping around that they want to be Kenya's fifth President are not fit, they are evidently entrenched in long history of thievery , revenge, intellectual , dynastic tendencies, administrative incompetence and exclusive politics of ethnic identity that will only have Kenya's nationhood and statehood to degenerate terribly into abyss political stagnation.

It is unfortunate that Kenya's political decision making is let by ethnic feelings and ethnic related manipulation but it is now a challenge to the educated young people of Kenya to come out of the cocoon of ignorance as well as traditional political irrationality to elect a President that is not corrupt, that is objective, nationalist, statesman, devoid of ethnic bias and intellectually experienced. The only person fittings these basic requirements is Doctor Mukhisa Kituyi. Let us all support him.