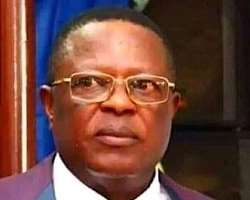 Among all the the civilian governors in the 21-year democratic history of Ebonyi State, Mr. David Umahi, qualifies as the most controversial. A shrewd student of Robert Greene, power-hungry Umahi rode on the wheels of controversy and treachery into Ebonyi Government House in 2015. Umahi curried and abused the trust of Chief Martin Elechi who by all ramifications was Umahi's benefactor-in-chief and boss. In righteous indignation, Elechi and his followers abandoned the Peoples Democratic Party, PDP, for tempestuous Umahi who rode roughshod in what qualified as an unconscionable journey to Ebonyi Government House.

Upon assumption of office as Governor of Ebonyi State, Mr. David Umahi was haunted by memories of the classical treachery through which he accessed power. He became afraid of his shadows. Locked in a secret war against his real self, Umahi proceeded with the warped resolve and mentality never to trust anyone. He appointed people into positions of trust but kept the trust in his closet. He created novel offices with bogus titles and responsibilities but diverted the benefits to himself and his immediate family.

Determined to divest Ebonyi people of economic power, the governor reneged on his campaign promise to increase workers' salaries. He went on to even slash workers' wages to half of what his predecessor paid. He abolished beneficial promotion such that no Ebonyi worker has been promoted since May 2015. Turning to Ebonyi traders and business class, the governor introduced a heavy tax regime which forced many companies out of Ebonyi State and crippled small and medium-scale enterprises such that shops closed in the day time and opened only at dusk. He demolished Abakpa market and banned business operations in adjoining streets on the guise that he intended to build a vegetable market thereon. After the ejection of Abakpa traders and the demolition of the market, nothing has been done on the space where the market was. When the traders sought spaces for business operations in Abakaliki International market, Umahi allocated the shops at subsidized rates to himself, his family and cronies and put them at exorbitant rents for the traders. This has frustrated many Ebonyi traders out of business, increased suicide rate in Ebonyi State and led many into hypertensive stroke. As at press time, traders in Lot 3 of Abakaliki International Market have protesting the suffocation of their businesses by Umahi who locked them out of the market following their inability to pay the high rent. Ebonyi farmers were not spared in Umahi's economic war: He diverted the CBN Agricultural loan funds meant for Ebonyi farmers in 2016; and fixed subsequent years' funds in private accounts for pecuniary interest. Umahi embezzles heavy Ebonyi State funds through mysterious empowerment programmes for ghost citizens. Umahi equally embarked on heavy concreting of some roads in Ebonyi State and built bridges even where their was no water; but he and his family supplied all the materials including water; and held all the contracts which were christened "direct-labour" projects". For a self-acclaimed apostle who "covenanted with God" never to award contracts to himself or his immediate family, this is the height of hypocrisy! In the governor's drive to exhaust his stock of cement, iron rods and other building materials, he built and duplicated useless edifices and structures in Ebonyi State. What else could make a governor build two stadia four kilometers apart in a state that has no football club? What informed the useless structures before Ebonyi State University gate and Abakaliki Township stadium and ten overhead bridges which have no roads connecting them to the hinterlands? What makes a new Government House and Governor's Lodge necessary when there are no teachers in Ebonyi schools and when school dropouts have continued to increase at geometric proportions daily? Umahi's King David Schools for Gifted Children and Ebonyi Vocational Institute over which Umahi's cosmopolitan concubine superintendents are drain pipes for Ebonyi State treasury as no education or training has ever taken place in those places. The Better Education Services Delivery for All, BESDA, programme in Ebonyi State ended on the flag-off arena in Ebonyi State as no single Ebonyi child has benefitted from it. Ebonyi education sector has died in the hands of the concrete governor who recently banned Academic Staff Union of Universities, ASUU, in Ebonyi State University. Ebonyi State University has become a human abattoir where students die from suffocation and stampede in examination halls as witnessed during the recent GST examinations. The result of this is that Ebonyi State has the highest number of out-of-school children/youths who could not fund their education in private schools or in the few highly commercialized government schools where pupils and students pay taxes known as IGR.

Deeming the desolation of Ebonyi workers and economic sector as conquest, the selfish governor faced the political class. Here, a firebrand academic and former scribe to Ebonyi State Government, Prof. Ben Odoh, dared and demystified the ego-driven governor by exposing his corruption. In order to protect himself from pending investigations and prosecution for corruption, the governor crawled into All Progressive Congress, APC in the fashion of Nicodemus. His expection that Ebonyi people whom he regarded as conquered would applaud and join him in APC was completely dashed as all the federal legislators and more than half of the state legislators of Ebonyi State, founding fathers, numerous youths, Ebonyi women and even his appointees as well as Ebonyi children called Umahi's bluff and rejected him. Frustrated, Umahi accused Ebonyi leaders including a former President of the Nigerian Senate and former Secretary to the Government of the Federation, Pius Anyim; pioneer civilian Governor of Ebonyi State and two-term senator, Sam Egwu; the rest of the federal legislators from Ebonyi State and founding fathers of Ebonyi State of terrorism. This roguish accusation earned the governor bedlams and condemnations which diminished and devalued him the more. Overnight, Umahi became a political leper to Ebonyi people who began to dare him, resign and reject his appointments and other Greek gifts on daily basis. His proliferation of promises of APC 2023 Guber ticket to every dick and harry has cheapened the ticket as Ebonyi people are determined to ensure that he has no hand in the making of his successor. The criminal conversion of equipment meant for Ebonyi waste recycling plant and their installation and continued use in a private agro-plant located in Umahi's former campaign office in Abakaliki has stalled the take-off of the recycling plant which Umahi's predecessor started. The recycling plant was intended to provide thousands of skilled and unskilled jobs for Ebonyi youths. This open theft of Ebonyi State property has provoked a sea of negative sentiments against saintly Umahi and led a formidable pressure group working for the interest of Ebonyi masses into a covert but painstaking enumeration of bank lodgements and investments of all Ebonyi resources stolen since 2015. So far, the discoveries of the group in PortHarcourt, Abakaliki, Lagos, Abuja, Dubai, the Republic of China, US and Uk are mind-boggling and will continue to make waves in all media spaces! Yet, the bank lodgement/property enumeration is still on. This sent jitters down Umahi's spines and made him realize that he has fought himself to a standstill. Afraid of emerging discoveries, Umahi ran to the Bishop's Court in Abakaliki to seek reconciliation. His Lordship's mediation is yet to bear fruits as Ebonyi people appear to have been pushed to the wall by the governor who will be haunted and hunted for long by his dark shadows. The commencement of EFCC investigation into the monumental corruption and financial asphyxiation of the local government system in Ebonyi State by Umahi; the leakage of documents of that prove Umahi's corruption and financial profligacy recently published in People's Gazette online newspaper as well as the alleged arrest of Austin, Umahi's brother, with $20 million indicate that Ebonyians are not relenting in their disgust for the emperor-governor. On 9th February, 2020, Ebonyi people called for Umahi's impeachment for providing Ebonyi Governor's Lodge, Abuja to the kidnap gang of his brother in-law, Bethrand Chukwu, who used same as both hideout and prison for his captives until the FCT Police bursted, arrested and paraded the six-man gang before the general public. Infact, three kidnap victims were rescued from Governor Umahi's official lodge in high-brow Maitama, Abuja!

From all indications, this war between Umahi and his dark shadows is so intense that it is graduating into his tragic flaw. Even the criminal asylum for which Umahi made his recent political summersault into All Progressives Congress, A.P.C., seems to be fast eluding him.

(Ogbu is a humanist, an academic and rights activist)